Midfielder committed to Marquette opts to join Flames in fall 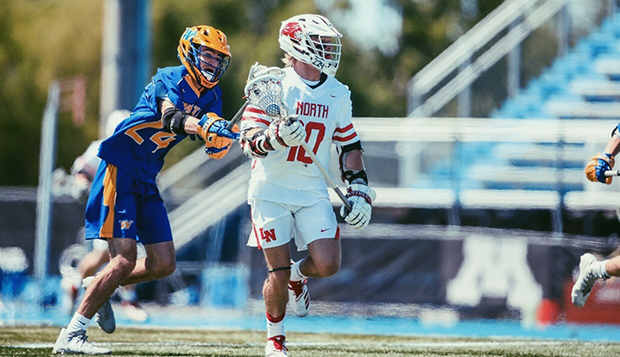 He participated in a Liberty Lacrosse Summer Camp in 2018 before attending a "Midnight Mayhem" matchup in April 2019, a 19-6 rout of then No. 24 Minnesota.

"Looking at Liberty, it is the place that is best for me," Mohs said. "I had the chance to talk to some of the coaches (recruiting him), and (Liberty Head) Coach Kyle (McQuillan) was by far the most personal, nicest, and most caring, and that really stuck out to me.

"When I went for the camp, I got to know some of the older players, who were helping to run it, and they were fun, great guys, and I will get to play with some of them who are returning for an extra year of eligibility," he added, due to COVID-19 ending their seasons in March. "I hope to learn as much as I can and get in and play alongside them as much as I can."

Mohs, whose family is originally from Milwaukee, where Marquette is based, changed his decision after the Golden Eagles' head coach stepped down.

"It had a lot to do with the type of university and environment that Liberty had to offer him academically, spiritually, and athletically," McQuillan said. "Obviously, being a Christ-follower, Liberty lined up with the environment he wanted to experience the next four years."

"He is an elusive player and, while he may not have the physical size of C.J., he is one of the best players in the state of Minnesota, and there is no question he is going to be able to come in and use his skill sets almost immediately," he said. "He is climatized to the speed of the collegiate game, and I have very few doubts he will be able to adapt. We are looking forward to having him."

Mohs started playing lacrosse in third grade, but also played basketball and football in high school, showcasing his speed and athleticism as a cornerback, wide receiver, and kick returner.

"I quickly fell in love with the sport and it has become more than just a hobby," he said. "While I continue to play three sports for my high school, lacrosse is without a doubt my passion."

Mohs totaled 150 points (94 goals, 56 assists) over a four-year varsity career at Lakeville North, a program that advanced to six state tournaments in a row before COVID-19 canceled his entire senior season in early April.

His lacrosse recruiting highlight video illustrates the kind of playmaker and scorer he could become at the collegiate level.

"Some guys are really quick dodgers and can make one move and either take a shot or pass it along," Mohs said. "Since my sophomore year, I've been going against other (NCAA) Division I poles (recruits). My speed is my biggest strength, what I use the most as a player to get around defenders."

Since his season was shut down, Mohs has looked for other options to remain active in the sport, including playing in a men's box lacrosse league, using area hockey rinks in the offseason.

"That's a sport that toughens you up for sure," Mohs said. "Collegiate lacrosse (players are) obviously going to be bigger and faster and stronger, but that doesn't mean you can't train to get there as well."

He has aspirations of leading the Flames to their first MCLA Division I National Championship. (Liberty reached its first two national tournaments at the Division I level in 2018 and 2019 and would have likely made it back for a third trip to Salt Lake City this month after getting out to a 6-0 start and a No. 5 national ranking.)

"Winning a national title seems like every players' lacrosse dream, and to have such a strong program, surrounded by so many great players, to win any championship is such an honor," said Mohs, who is even more focused on his spiritual growth. "Like the Bible says, ‘Iron sharpens iron.' (Proverbs 27:17). That's a huge reason why I did picked Liberty, because it is faith-based. Lacrosse is a big part of my life, but ultimately my faith is the biggest thing in my life."

Academically, he plans to study in Liberty's School of Business, possibly following in the footsteps of his father, a vice president for marketing who has an undergraduate degree in pastoral studies.