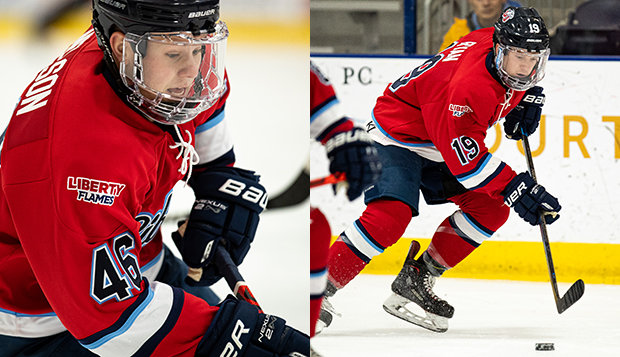 "I don't think we've had two players on the ACHA First Team together," Flames Head Coach Kirk Handy said. "I am super proud of all the guys in the program and the season we had this year. It was an unbelievable year and to have players honored for their individual achievements is a tribute to the big picture, the work the guys put in this year to help the team be successful."

Last week, both ACHA DI Rookie of the Year Colin Baird, a defenseman, and freshman goalie Cédric Le Sieur were honored on the league's All-Rookie team. Baird was the Flames' only other ACHA DI Athletic representative, on the Third Team.

Ryan, who was previously named the Flames' MVP in the team's end-of-year awards, and Nelson, who was selected as the team's top defenseman, both demonstrated exceptional playmaking skills throughout their four-year careers. As seniors, they paced the team with 43 and 42 assists, respectively, and ranked first and fourth on the team in respective scoring after factoring in their 22 and 12 goals. Ryan's 65 points ranked him fourth in the nation.

"Both Garrett and Quinn have the ability to break a game wide open," Handy said. "In the (Feb. 20-21 home sweep of No. 1-ranked Adrian), both were both integral parts of our power play. Garrett was injured and spent a good part of the third period in the trainer's room before he came back and had the heroics that he did," scoring the game-winner on the power play with 43 seconds remaining in the final.

He said Nelson's commitment was evident from the preseason last summer, when he returned to Liberty early to work with Club Sports Director of Strength and Conditioning Chris Kerr to help prevent recurring injuries that hampered him in recent seasons.

"Garrett came back in fantastic shape and really worked hard to make sure he was a guy who could not just make it through the year, but play at a high level all season," Handy said.

Ryan, who totaled 225 points (81G, 144A) for his four-year career, improved his production every season.

"Quinn is definitely one of the most consistent guys who has ever played in a Flames uniform," Handy said. "That's a mark of maturity, not being great in one or two games or half a season, but consistently finding ways to be at the top of your game. Quinn has always been a very creative player, and over the last couple years has definitely developed the ability to be a dominant goal scorer."

More than what they helped the Flames accomplish on the ice, including leading the team to three ESCHL regular season and three ESCHL Tournament championships over the past four seasons, Handy is extremely pleased with their contributions to the program outside the rink. That included trips to Russia, where Ryan represented Liberty at the World University Games last February, and Finland, where the Flames traveled as a team in early January.

"Both Quinn and Garrett are great representatives of our program and have grown over the years and matured on and off the ice," Handy said. "For me, the most important thing is what they do in their personal lives, and how they embody the mission of Liberty. It's through their ability to connect and establish great relationships and a great foundation for our program that I'm most proud." 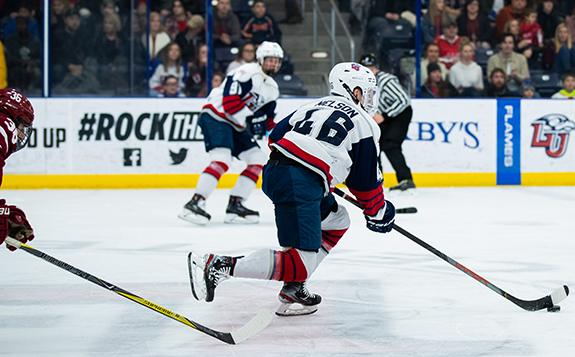 Garrett Nelson demonstrates his speed and puck handling skills on a breakout against Alabama.