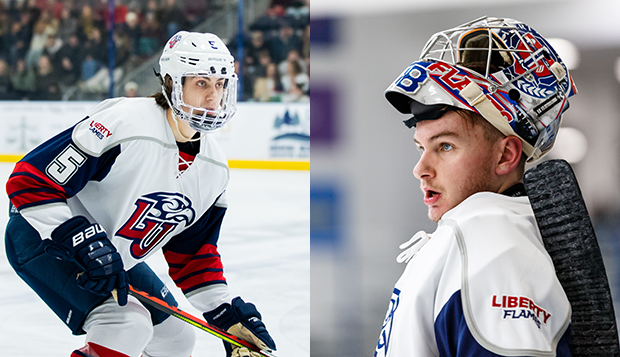 Colin Baird, a defenseman from Minnesota, and Cedric Le Sieur, a goalie from Montreal, stood tall for the Flames as freshmen. (Photos by Ellie Richardson and KJ Jugar)

UPDATE: Liberty University freshman ACHA Division I men's hockey player Colin Baird became the first defenseman in the 18-year history of the award to be named the league's Rookie of the Year, announced on Saturday. He is the second Flames player to earn the honor, 10 years after forward Brent Boschman received it in 2010.

4/17/2020: For the first time in the 14 seasons Liberty University has had an ACHA Division I men's hockey team, the Flames put two players on the All-Rookie team, which was announced on Friday.

Baird, a 6-foot, 5-inch, 200-pound freshman from Shoreview, Minn., who was named the Flames' Rookie of the Year, capped off a fantastic season by scoring nine goals and distributing 22 assists for 31 points in 37 games, second most among defensemen to senior Garrett Nelson (12G, 42A).

He netted two goals and one assist in the third period an 8-2 rout of Ohio during Liberty's second "Midnight Mayhem" matchup at the LaHaye Ice Center on Nov. 8, helping the then-eighth-ranked Flames break open a 4-2 contest and gain separation from the No. 9 Bobcats in the ACHA rankings.

Le Sieur, a 6-foot, 190-pound athletic training major from Montreal, posted a stellar 15-1 record with a team-best 1.90 goals-against average and 92.3 save percentage this season. He saved his best game for last, making 34 saves in his first shutout for the Flames in a 4-0 ESCHL championship game triumph over Stony Brook on March 8 in West Chester, Pa. He was named the ESCHL Tournament MVP.

The Flames finished the season ranked No. 2 in ACHA Division I, the highest in program history under 19th-year Head Coach Kirk Handy, who was named the 2019-20 ACHA Men's Division I Coach of the Year for the first time.