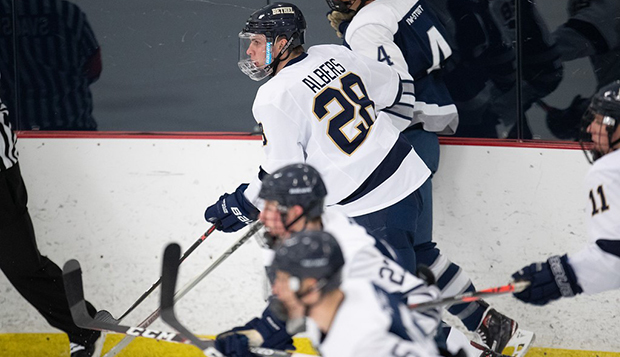 Zak Albers played in about half of the games as a freshman at NCAA DIII Bethel (Minn.) University this past season.

An opportunity to venture into the fashion industry while reuniting with friends and continuing to play the sport he loves were powerful incentives for freshman forward Zak Albers to transfer from Bethel (Minn.) University's NCAA Division III program to Liberty University's ACHA Division I men's hockey team this fall.

"I played on his line once or twice, but I was a third-line guy and Matt was on the No. 1 line and played on the power play," said Albers, 21, who has since added 15 pounds to his 6-foot, 5-inch frame to bulk up to 205. "I am a physical playmaker and have a big presence on the ice. I work really hard in the corners, have a heavy shot, and can score some goals, taking the puck and driving to the net. I hope to be a three-dimensional player, a forward who is an offensive and defensive threat, doing whatever I can for the team and helping out wherever needed."

"He is a guy who has a big body and will be able to add a physical element to our game, and definitely will be a guy who can come here and be able to jump in and be ready to play, to help us with the loss of all of these seniors," Flames Head Coach Kirk Handy added. "He is a smart player and someone who is positionally sound when he's out on the ice and someone who is going to work hard at both ends of the rink."

Albers said Bartel was instrumental in his decision to make the move from St. Paul, Minn., to Lynchburg, Va.

"We were really close buddies off the ice and he was recruiting me hard, pushing and encouraging me," he said. "I haven't gone on an official visit, but I went to Liberty for an FCA Hockey camp two years ago. Between academics and hockey, Liberty has everything that I want."

After studying business marketing at Bethel, Albers plans to change his major to fashion design while pursuing a minor in business at Liberty.

"Part of the reason why I left is I really feel that God is calling me into the fashion industry, and I have to be faithful in where God is leading me," said Albers, who has worked as a stylist for J. Hilburn, based in Dallas, in recent years. "I've been passionate about it for a long time. I want to start my own designer label, like Christian Dior, and see what God has for me in the fashion industry and just be a light in that area."

He looks forward to continuing his hockey career, pursuing his career calling, and furthering his faith in a Christ-centered environment.

"Liberty is a Christian school and I was really looking for a community of people that are like-minded and can help me and build me up and encourage me, as iron sharpens iron," Albers said.

"He will be a guy who is going to be great for our culture, on and off the ice," Handy added.

Born in Oklahoma, Albers moved around a lot growing up as the son of John Albers, a colonel in the Marine Corps. He also lived in Maryland and Texas, where he played with the Dallas Penguins youth program and launched his Junior hockey career with the Texas Junior Brahmas at age 18 in 2016.

"I've had a lot of opportunity to learn from my dad's leadership," Albers said. "Being an older guy, who has been a lot of places in hockey, I want to be a team player and a spiritual encourager, to help guys in their walk and be a leader and example to men of how Christians are supposed to live."

He was an encouraging witness to Bartel, who made a first-time commitment to follow Christ and was one of three Flames to be baptized this past fall.

"I had the opportunity to be a Christian around him before he became a Christian, and shared my faith with him a few times, so I was excited to hear that he gave his life to Christ and am super happy for him," Albers said.

He grew both physically and emotionally playing this past season with the Royals.

"The competition was really good, and it was a transition from Junior hockey," Albers said. "You were not playing against 18-year-olds any more, but grown men who are 23-25 years old. It was a different change of pace, for sure, and a good opportunity and experience."