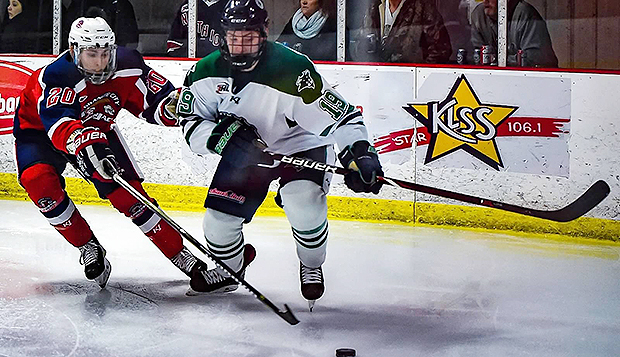 Tom Nagle (left) defends his cage as a member of the Granite City (Minn.) Lumberjacks during the 2018-19 season.

"We are super excited to have Tom Nagle commit to us," said Flames Head Coach Kirk Handy, who had recruited Nagle before he chose to go to Bethel. "With the loss of (senior defensemen Garrett) Nelson, (Jacob) Fricks, (Josh) Bergen, (Basil) Reynolds, Tom is a guy who can jump right into the mix as a transfer student and help us. The only thing we are expecting him to do is to come in and work hard."

Nagle grew up with Liberty freshman defenseman Colin Baird, and they became best friends as they played on the same Mounds View High School team from 2013-16, serving as co-captains during their senior season.

"Our players are our best recruiters," Handy said. "Colin and Tom have been friends for years, which was a deciding factor for Tom to join him here, even though he has never visited Liberty's campus."

"He was the major player to get me there," added Nagle, who plans to pursue a B.S. in Business Administration — Finance, also Baird's major. "Besides the fact that the academics are good, Colin has showed me a lot of things that have made me want to go to Liberty — both for hockey and spiritually. It is just a good school."

Nagle and Baird plan to live in the same apartment with rising sophomore forward Matt Bartel.

"It will be fun, and definitely helps knowing some of the guys already," Nagle said.

Handy noted that Chaydan Lauber, another senior defenseman, is returning for a fifth season of eligibility at Liberty. Besides Baird, defenseman Dmytro Kobylyanskyi will be back for his sophomore season with incoming freshman defenseman Trey LaBarge also joining the corps.

Nagle, who is 6-feet, 2-inches tall and weighs 181 pounds, was used at center forward as much as defenseman in the games he played for Bethel.

Previously, Nagle scored nine goals and distributed 26 assists in 2018-19 with the Granite City Lumberjacks, an NA3HL Junior Hockey team based in St. Cloud, Minn. He said besides his leadership skills, his greatest strength as a player is his stickwork.

"I have been told I see the ice well as a defenseman," said Nagle, who expects the transition from NCAA Division III to ACHA Division I hockey to be a smooth one. "Lately, been picking up the offensive side of my game. I would just like to help the team however I can."