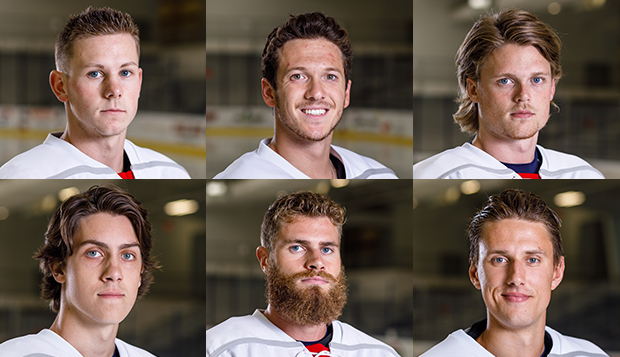 Liberty University's ACHA Division I men's hockey team did not have an end-of-the-year awards banquet this season, which was cut short by COVID-19  with the cancelation of the ACHA Division I National Championships, but the Flames still honored their top players this week via Club Sports and Men's Hockey social media accounts.

Senior forward Quinn Ryan was named the team's Most Valuable Player after leading the Flames in scoring with 22 goals and 43 assists. Ryan, also the ESCHL's MVP and recipient of the league's Sportsmanship Award, shared the Flames' Forward of the Year honors with sophomore Arturas Laukaitis, Liberty's third-leading scorer (26G, 33A) who paced the team with 10 power-play goals.

Senior Garrett Nelson, the Flames' fourth-leading scorer with 12 goals and 42 assists, was named the team's Defenseman of the Year and freshman defenseman Colin Baird was selected as Rookie of the Year after netting nine goals and distributing 22 assists.

Senior forward Victor Blomberg was designated as Liberty's Hardest Worker after battling through multiple injuries to contribute a persistent forecheck and a steadying presence on the Flames' penalty kill unit along with senior forward Andy Clarke (12G, 9A), the team's Most Improved Player.

Liberty's men's hockey coaching staff are still planning to host the annual Flames Prospect Camp at the LaHaye Ice Center. Originally scheduled over the April 2-5 College For A Weekend (CFAW), the event has been pushed back to June 11-12, the first two days after Virginia's Stay At Home order is due to end.