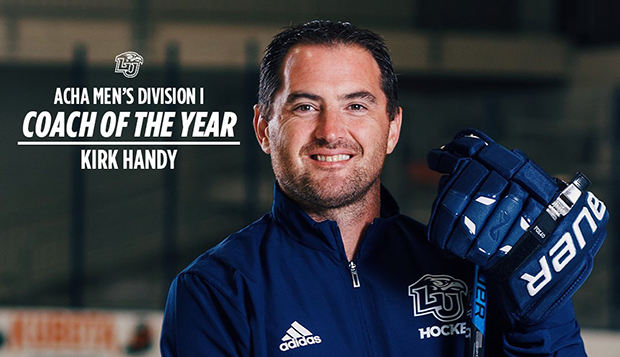 Kirk Handy guided the Flames to their third ESCHL regular-season and tournament championships in four years.

The American Collegiate Hockey Association (ACHA) announced on Monday that Liberty University Head Coach Kirk Handy has been named the 2020 Men's Division I Coach of the Year for the first time in his career, as selected by ACHA's 70 head coaches.

Handy was selected from a group of finalists that included Adrian College's Gary Astalos, Drexel University's Kyle Zoldy, and the University of Arizona's Chad Berman.

"As a coach, I'd much rather have the national championship, but it is an awesome honor to be recognized for," Handy said, deflecting praise to Flames' Associate Head Coach Jeff Boettger, who he has coached alongside for 14 years, as well as assistant coaches Jonathan Chung and Dan Berthiaume, who orchestrate the Flames' penalty kill and power play units, respectively. "As I think about winning this, it is definitely not a Kirk Handy award but a coaching staff award. The honor is for our coaching staff that has night-in and night-out worked to make our team the best that it can be."

Handy expressed his thankfulness to Liberty President Jerry Falwell and Vice President of University Support Services Trey Falwell for the opportunity to coach the Flames for the past 20 seasons. He also credited his players, both current and past, who scored all of the goals and did all of the work on the ice.

"I was really proud of our guys this year and the quality of men that we have had in our program over the years, the alumni that have built this program," Handy said. "It's a tribute to them and I'm honored to be associated with those guys."

Liberty opened the season on a nine-game winning streak, its best start in 10 years, capped by a dramatic 4-3 overtime victory over Ohio on Nov. 9 at the LaHaye Ice Center that completed its first sweep of the Bobcats in nine regular-season series. The Flames ended the year on a 13-game tear, highlighted by a sweep of top-ranked Adrian at the LIC — the Bulldogs' only two losses of the year — and by winning their third ESCHL Tournament championship in four years by shutting out Stony Brook. Previously, Liberty clinched its third ESCHL regular-season title in its fourth season in the conference, finishing 18-2 in league play.

After graduating with a degree in psychology from Liberty in 1999 as its all-time leading scorer and the Atlantic Coast Collegiate Hockey League Player of the Year, Handy spent a year as an assistant coach with the Flames in 2000-2001 before being named head coach of the ACHA Men's Division II team in 2001-2002. He guided the Flames to an ACHA National Championships runner-up finish in 2005-2006 before transitioning the team to the Division I level in the 2006-2007 season, when Liberty opened the LaHaye Ice Center. Entering his 20th season at the helm this fall, Handy's career record stands at 455-165-40.

Handy also serves as athletic director for Liberty's Club Sports program that comprises another 40 teams besides his men's hockey team, including Division I and II women's and Division II and III men's hockey teams. He measures success not only by performances in the arenas where those teams compete, but by each student's progression from the moment they arrive on campus to the time they graduate.

"To me, winning games and winning championships is one thing, but continuing to develop our student-athletes, continuing to make a difference in their lives, is a real big part of it," Handy said. "I love the challenge of working to build the hockey program at Liberty each and every year. We're on a mission of Training Champions for Christ, and that's what we're trying to do through our Club Sports department — to grow our men and our program and have them go out and make the difference."

Handy noted that this offseason will be one of the most difficult in program history with such a large senior class graduating.

"It is a challenge and we embrace a challenge," he said. "We don't believe in rebuilding; it's a reloading process. We have some exceptional young men who have decided to come to Liberty, and we're going to work to keep building them up."

Handy, a native of Huntsville, Ontario, and his wife, Jannie, live in Forest, Va., where they are raising four boys — Parker, Preston, Pryce and Porter — between the ages of 7 and 12.

Kirk Handy (fourth from right) and his coaching staff and players celebrate their third ESCHL crown.