Flames hockey player displays passion for life on and off ice 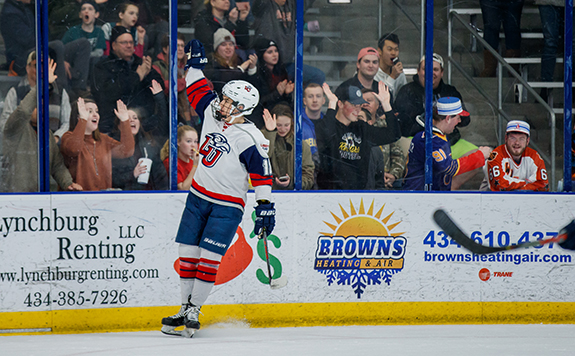 The alarm went off at 6 a.m. as the sub-freezing wind blew ferociously outside the window of a 6-year-old boy's room in Winnipeg, Manitoba, Canada. It was a Saturday morning in the dead of winter in 2003, but the young boy was more than willing to sacrifice a morning of sleeping in to pursue his dream of becoming a star hockey player. 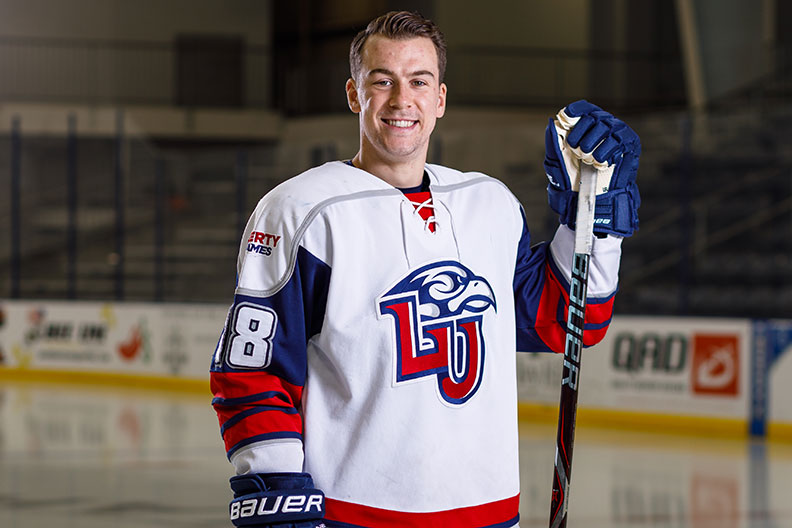 His father helped him put on his coat before they loaded his gear into their vehicle and drove to the local ice hockey rink. The boy was already well-accustomed to being on the ice; he started skating at age 4, pushing a chair in front of him for support before he learned how to steady himself.

That boy with a dream is now senior Jordan Bochinski, a standout forward on the Liberty University Flames ACHA Division I men's hockey team — the No. 2-ranked team in the country.

Following a successful career in youth hockey, Bochinski ventured south to Steinbach, Manitoba, where he joined the Steinbach Pistons in the Manitoba Junior Hockey League where he began to display his God-given talents.

But his newfound popularity led to him falling into a way of life that was far from Christ.

"The Junior Hockey environment is pretty tough," said Bochinski, 23. "A lot of guys don't have their priorities in line and they think a lot of other things are more important than what we as Christians know to be true in life. Those first two years up there I was kind of lost and didn't know what to do and didn't know which direction to go. I probably picked the rougher crowd and made some poor decisions."

Those decisions led Bochinski to the lowest point in his life. It was when he hit rock bottom that he began to understand that worldliness leads to emptiness while a life lived for the Lord offers fulfillment and peace.

"When I was 19, I rededicated my life to Christ and that was the first time I actually started living for Christ," Bochinski said. "To make that relationship (with Christ) my own in Junior Hockey was unheard of because that experience often takes you away from the Lord."

The next season, the Pistons' staff saw qualities in Bochinski that they were looking for as their next face of the franchise.

"When I was 20 years old, I was named the captain of the Steinback Pistons, and as the captain of the team you are called to lead the boys," he said. "You have to lead the ship. As a recently converted Christian, I was living out my faith and on fire for the Lord, but a lot of guys in the locker room did not agree with that." 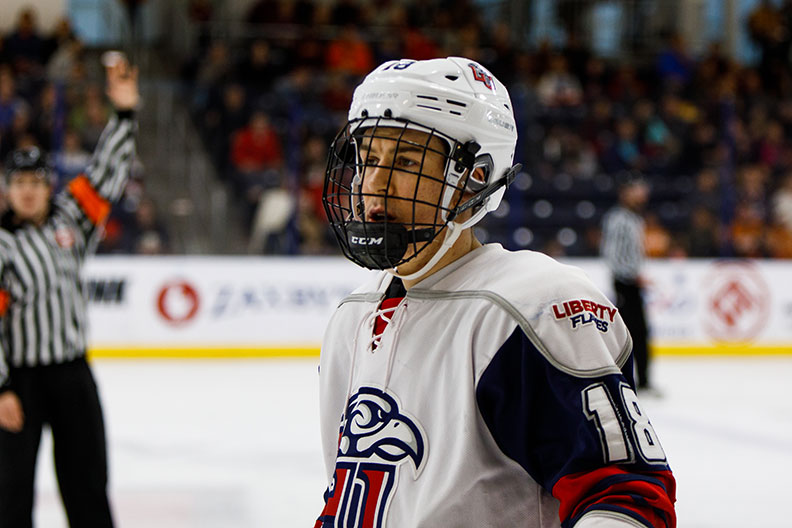 However, the Lord blessed the Winnipeg native with favor in the win column that year as the Pistons posted a franchise-best record of 49-10-1 and Bochinski experienced the most productive of his four seasons with the program, netting 21 goals and distributing 25 assists.

Following that season to remember, Liberty's Division I Head Coach Kirk Handy brought in Bochinski as a member of the 2017 recruiting class. Since then, Bochinski has grown even more  in his relationship with the Lord while helping to lead the Flames to their highest national ranking in school history.

The digital media student has also displayed his creative talents off the ice, developing a following on his hockey-focused podcast, "The Bo Show."

Bochinski said although he's not the top scorer, he enjoys his complementary, yet essential role with the Flames.

"I love my role, working hard while still adding that skill asset to the team," Bochinski said. "If you look at the years I've been here, I've always been in the top six or seven in points, and this has probably been my best year yet."

After scoring 15 goals and distributing 16 assists in his rookie season and netting 18 goals and 12 assists his second, Bochinski totaled a career-high 46 points (17 goals, 29 assists) this season.

He attributes a portion of his athletic and academic success to his fiancée, Cam, who is a senior education major at the University of Manitoba in Winnipeg, as she is the main source of strength and encouragement that the Lord has given him.

Bochinski said while they are hundreds of miles apart, Cam consistently supports him. 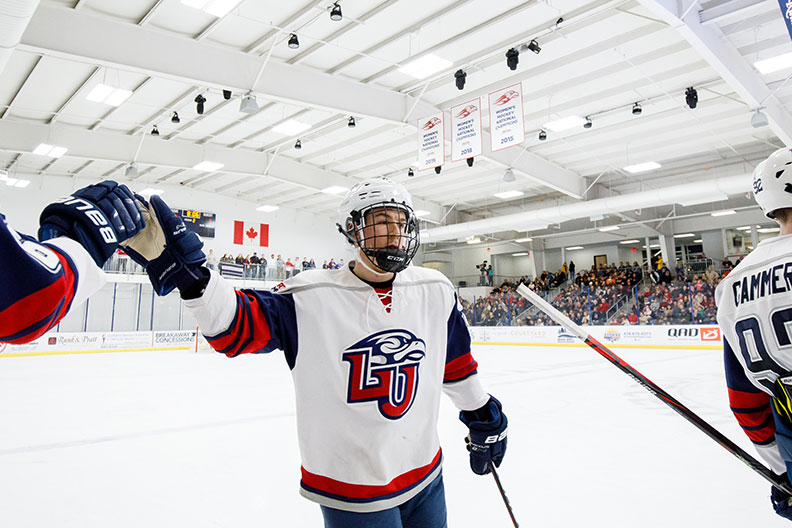 "She actively encourages me while she's at home. I can't wait to spend the rest of my life making sure I can comfort her and support her and be there for her."

Now that the season is over — cut short by the coronavirus (COVID-19) that canceled the ACHA National Championships in Texas along with the majority of collegiate and professional sporting events nationwide — the couple will be seeking the Lord's will for the future after they get married in July.

Regardless of where Bochinski goes, the Liberty locker room leader and playmaker on the ice will continue to be a Champion for Christ. 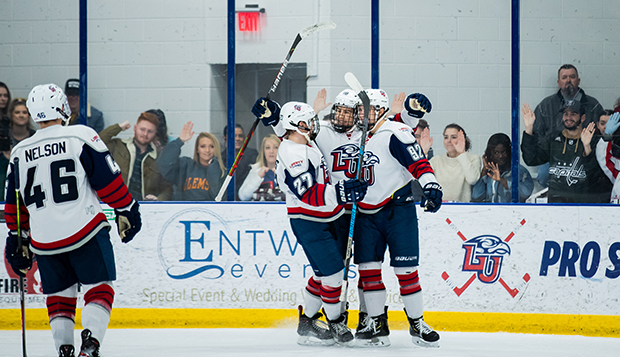 Jordan Bochinski is congratulated by Flames defensemen Garrett Nelson
(46) and Basil Reynolds (27) and forward Brett Gammer (92) after a goal.