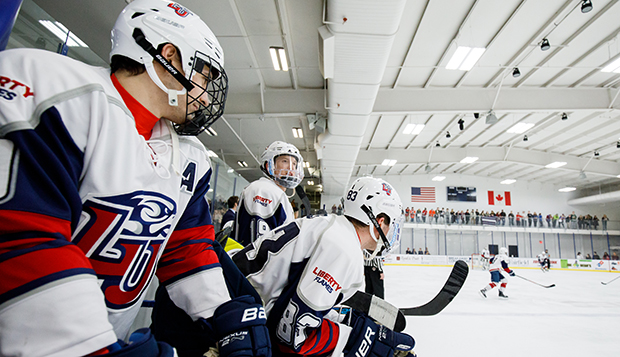 The Eastern States Collegiate Hockey League (ESCHL) announced its annual league awards this week and several members of Liberty University's ACHA Division I men's hockey team, the ESCHL regular-season and tournament champions, were among those honored.

"Quinn's a special player and when he's on the ice, he does special things," Flames 20th-year Head Coach Kirk Handy said. "For him to be honored that way, not only by our team but by the whole conference, is saying something. Quinn developed consistency in his game over his career at Liberty to where he is a guy who's an offensive catalyst for us whenever he's on the ice. We are really proud of him."

Freshman defenseman Colin Baird was selected as ESCHL Rookie of the Year and was joined by Ryan and senior defenseman Garrett Nelson on the All-League First Team.

"We knew from watching Colin before he came to Liberty that we were going to be getting a guy who is a solid defensive defenseman," Handy said. "It was great to see his offensive side take off as well and nice to see him get the opportunity to be recognized for his all-around play as a defenseman. He and Garrett Nelson formed an unbelievable defensive pairing for us. I would argue that was one of the top pairings in the country."

Freshman goalie Cédric Le Sieur was named ESCHL Tournament Most Valuable Player after allowing one goal in two games, including posting his first shutout as a member of the Flames in a 4-0 championship game triumph over Stony Brook.

Le Sieur was joined by Baird and sophomore forward Josh Fricks on the All-Rookie Team and Le Sieur and Fricks both were named to the All-League Second Team.

Senior forward Andy Clarke was named to the ESCHL All-Defensive Team for his work on the penalty kill in the Flames' special teams.

"Andy was a great two-way player for us, arguably one of the best two-way players on our team," Handy said. "His defensive play kept him, on our top PK unit for the last two seasons. Andy takes pride in being willing to do the little things that make our team effective. He was great in the faceoff circle, great on the PK, and really became a great leader in the locker room."

He was joined by his brother, Cody Clarke, and fellow senior forwards Victor Blomberg, Jordan Bochinski, Josh Hamilton, and Brock Thompson, senior defensemen Basil Reynolds, Josh Bergen, and Nelson, junior forwards Ryan Cox and Cole Gammer, and sophomore forward Arturas Laukaitis, who is classified as a junior academically, on the ESCHL All-Academic Team. They maintained a GPA of 3.2 or better over their junior and senior years.

"One of the things I was really pumped for was we had 12 Academic All-Americans," Handy said. "That shows the kind of student-athletes we have on and off the ice."

Overall, Liberty's hockey team raised its accumulative GPA above 3.50 this past semester, which set a program record.