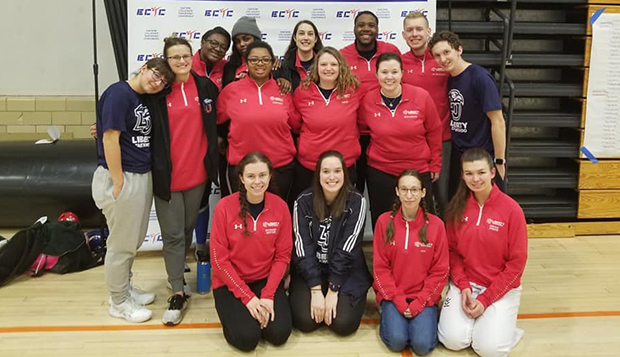 The Flames' trio defeated a team from Cornell in the quarterfinals before losing its first two of three bouts in a semifinal showdown with Ohio State.

"We have only been to two ECTC meets this year, and we placed second at Cornell and third at Princeton," Liberty Head Coach Tom Childress said, noting the team earned 70 points at Cornell and 60 points at Princeton and now ranks third in the Division III standings with 130 points. "We know we're on the right trajectory. Now we're finishing in the top three at these events, including making it through to the medal rounds."

The Flames had two groups of three reach the semifinals at Cornell, where they placed runner-up to Johns Hopkins.

At Princeton, Liberty also advanced two tandems to the quarterfinals, also earning team points, after starting in the round of 64 — the blackbelt tandem of junior middleweight Shelby Wilson and freshman Ashley Brody, who alternated at heavyweight with senior Jacki Baumann, and the green belt team of sophomore Lauren Western (middleweight) and senior Teagan Molinets (heavyweight).

Due to injury and illness, only 15 members of the Flames and Lady Flames traveled to Princeton.

"It was a small team, but still did really well," Childress said.

Senior Wesley Angerville competed individually in the blue/greenbelt division and won his heavyweight match, but did not advance due to a lack of teammates in the other two weight classes.

Childress learned this week that the National Collegiate Taekwondo Association (NCTA) Championships, originally set for April 3-5 in Berkeley, Calif., has been postponed until the fall semester due to the threat of the spread of the Coronavirus. UC-Berkeley has suspended any activities on campus that would include visitors as well as those involving travel to other campuses.

"We were planning on taking 11 of our athletes to California, at least three of whom are seniors," Childress said. "Our guys are working really hard and I think we would have been ready to go, but there is nothing we can do about it."

Liberty was planning to travel to Vermont for the final ECTC competition later this month, but Childress anticipates that being canceled as well.