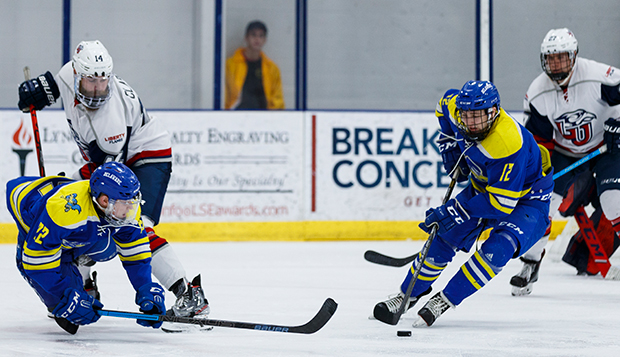 "We weren't real happy with the way we started as a team," Liberty Head Coach Kirk Handy said. "We didn't play to our potential. We are very fortunate we were able to win the game tonight and move on to get another opportunity to play up to our potential (on Sunday)."

The Blue Hens (21-17-1) showed Liberty (32-4, ranked second in ACHA DI) what to expect from playoff hockey, battling through a scoreless back-and-forth first period, with the Flames outshooting Delaware 16-7 after 20 minutes.  Sophomore forward Matt Bartel hit a post with a shot from the right crease and launched another from the top of the left circle that was glove-saved by Blue Hens' netminder Christopher Ponticello.

At the 18:39 mark of the second period, after Liberty freshman goalie Cédric Le Sieur made a save on his back, the Flames capitalized on a Delaware defensive breakdown when senior forward Jordan Bochinski spun around a Blue Hens defenseman and assisted Bartel with a cross-crease pass for a one-timed finish into an open net for a 1-0 lead.

Le Sieur blocked a Delaware shot on a two-on-one break at the game's midpoint and freshman defenseman Colin Baird and Bartel cleared the puck out of the Flames' defensive zone on back-to-back sequences before senior forward Josh Hamilton followed his own blocked shot in the left crease and jammed the puck past Ponticello from behind the left post for a 2-0 advantage with 8:13 left in the second.

Delaware killed a penalty and then capitalized seconds into a power play of its own when forward Chris Mazzella launched his 26th goal of the season, an unassisted blast from the high slot at the 2:05 mark.

Then, with 16:34 left in the third period, the Blue Hens netted the equalizer on another power-play goal, with Ivan Sidoriak receiving a centering feed from fellow defenseman Jakob Defares and roofing a shot past Le Sieur to knot the contest at 2-2.

"We don't want to keep taking the penalties we took tonight," Handy said. "We can't keep putting our PK unit in that situation of killing off those penalties. We want to be better prepared tomorrow."

A high check near the Delaware bench put the Blue Hens on a penalty kill and the Flames capitalized with the game-winning power-play goal. A beautiful backdoor pass from Ryan to Fricks set him up for a one-timer from point-blank range, lifting Liberty to a 3-2 advantage with 1:52 remaining in regulation.

"Our power play has been clicking along here pretty good the last month or so and that was a big goal they scored," Handy said.

An unsportsmanlike conduct penalty against Delaware's bench kept the Flames on the man advantage and when the Blue Hens pulled Ponticello, senior defenseman Garrett Nelson put away an empty-netter with a shot from along the left boards to seal the victory with 50 seconds to go.

The Flames advance to face second-seeded Stony Brook, a semifinal winner over No. 3 New York University, on Sunday at 2:30 p.m., webcast live by Delaware Hockey.

"Our focus is on the game tomorrow," Handy said, noting that both teams beat Liberty once this season. "Winning and being at our best is Important for us. At this point in the year, it has everything to do with ourselves. That's got to be our focus." 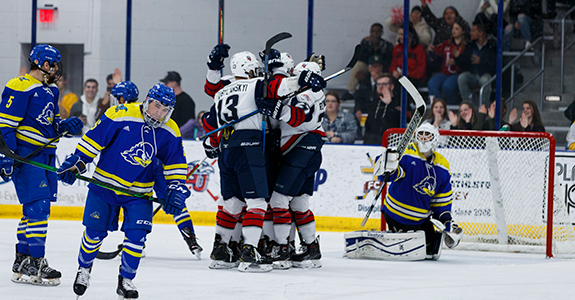