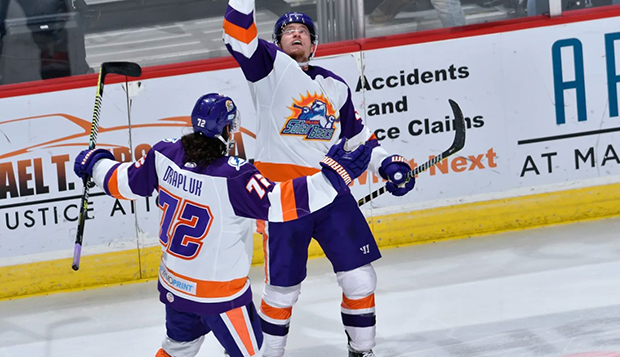 "I had a great experience over there and saw a lot of cool places throughout Europe that I wouldn't have had a chance to see without hockey," said Schartz, 25, who joined the East Coast Hockey League's (ECHL) Orlando Solar Bears in February after playing 33 games in the with the ECHL's Toledo Walleye, Indy Fuel, and Norfolk (Va.) Admirals in 2018-19. "There is a lot of movement in the ECHL. There was an opening and they offered me a spot and I jumped at the opportunity and took it.

The ECHL is two levels below the NHL, with the AHL the next step. He hopes to have found a home in the Sunshine State after growing up in Texas.

"It's been awesome since I've been here, and a smooth transition coming back from playing hockey in Europe," he said. "Orlando's an amazing city and I like the organization and the coaches and think they like me. I'm hoping to plant some roots here. The winter climate in Florida is hard to beat and I have really enjoyed my time there."

Schartz was spotlighted on the Solar Bears' website the weekend they hosted the Admirals for Faith & Family Night on Feb. 21.

"That was a fun one and a good game, though Norfolk had an entirely new team and coaching staff so there were not a lot of familiar faces," said Schartz, who scored in the contest.

He says he has welcomed the return to the United States and the ECHL, where he can share the Gospel more freely with no language barriers.

"It is easier to start those conversations than it was in Europe, and to love on my teammates," Schartz said. "Here in the South, we're kind of in the Bible belt and there are a lot of churches and opportunities to grow spiritually. Anywhere I go, I'm going to use hockey as my platform. It's a dark world, and no matter what city I'm in, I'm always going to reflect Jesus and let others see the light in me."

This past weekend, the Solar Bears defeated the defending ECHL champion Newfoundland Growlers, 5-1 on Saturday on their home ice at the Amway Center after losing Friday night at the Atlanta Gladiators, 6-1, and to the Florida Everblades, 3-0. Orlando (26-28-5-1) dropped into fifth place in the ECHL South Division standings with only the top four teams making the playoffs.

"There are about (12) games left and it's a tight race," Schartz said. "It is going to be a race to the finish line, for sure. We've just got to finish hard and keep going. There has been a lot of movement up and down between the ECHL and the AHL, and hopefully we'll get some of them back for a playoff push."

He has kept an eye on the Flames' historic season as they approach this weekend's ESCHL playoffs and the March 19-24 ACHA National Championships.

"It was awesome to see them get the sweep of Adrian (on Feb. 24-25)," said Schartz, who played with most of the 14 graduating seniors from 2015-18.  "I came in with a lot of those guys and a lot of them are my best friends. They've got all the tools to do (win a national championship) and it's going to be up to them."

He was excited to be a part of the Flames' transformation to the top ranks of the ACHA.

He is happy to be representing Liberty and the Lord in the professional ranks, along with Cam Bakker ('15), another former Flames defenseman now playing with the ECHL's Brampton Beast.

"With me and Cam playing professionally, it's awesome for recruits to see that we have the ability to do that coming out of Liberty," Schartz said. "He's in Ontario, I'm in Orlando, so it is awesome we have two former Liberty players In the ECHL, hopefully two of many more to come."