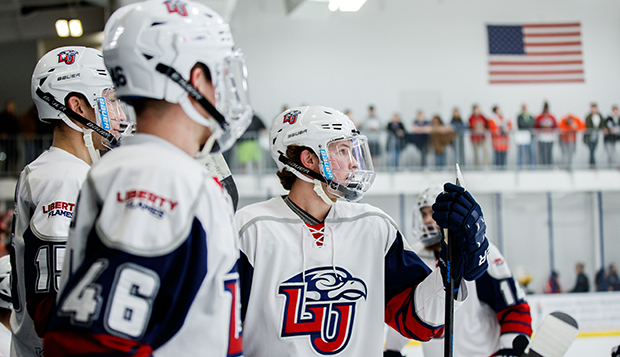 The top-seeded Flames, who finished 31-4 in the regular season and 18-2 in ESCHL action, will play No. 4-seeded Delaware, a 5-4 winner over No. 5 Rhode Island, in Saturday's 5 p.m. semifinal showdown.

"Our No. 1 task is to go there and win the title," Liberty Head Coach Kirk Handy said. "That's one of our big goals at the beginning of the year and something we'll have our sights set on. We understand it's a big task ahead of us, but we're excited to embrace the opportunity."

Last season, the Orange edged the Flames in double overtime in the final, preventing Liberty from three-peating as tournament champions after joining the league in 2016-17.

All games are being webcast live by Delaware Hockey on its YouTube Channel with radio broadcasts also available.

Handy said the veteran squad that features 14 seniors has played consistently throughout the season, overcoming injuries with a next-man-up mentality.

"We believe in the guys in the locker room and are proud of them for managing the ups and downs of the season like we have, which is real important," Handy said. "To get to where we're at right now, consistency has been a big part of it. Because of the experience we had last year, especially, our guys know what it's going to take to get to that next level."

Senior forward Jordan Bochinski said the Flames need to carry out their game plan with precision and continue to build on the momentum they have gained from winning the last 11 games of the regular season, including a Jan. 21-22 sweep of top-ranked Adrian College.

"We've got to stay even-keeled," Bochinski said. "We know what makes us successful. We know what we have to do. For our guys, it's just a matter of executing on all four lines. We can't have just one line working. We have depth on our team and we need every guy to show up. We know that and I think everyone will show up."

The tournament serves as a tune-up for the Flames in preparation for the March 19-24 ACHA DI National Championships in Frisco, Texas.