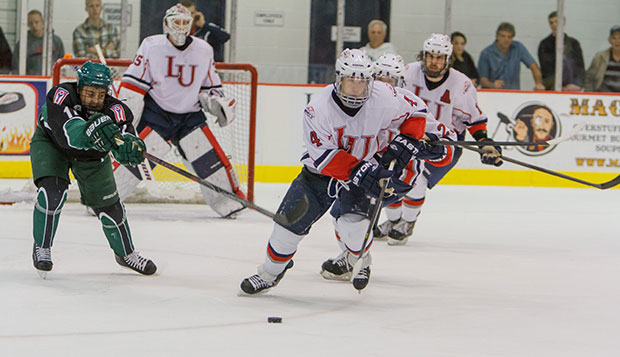 Liberty split two one-goal games with Ohio in late October in the LaHaye Ice Center, but the Bobcats won the third meeting decisively in Saturday night's second round of the ACHA DI national tournament in Chicago.

A roller coaster ride of a season ended with the wheels coming off the train for Liberty University's Division I men's hockey team, Saturday night at The Edge Ice Arena in Chicago, Ill. The 13th-seeded Flames suffered a 7-4 season-ending setback to fourth-seeded Ohio in the second round of the ACHA DI national tournament.

"We missed a bunch of good opportunities," Liberty head coach Kirk Handy said. "There were a lot of times, like at the end of the first period and the beginning of the third, where we were on the brink of getting right back into the game. At the end of the second period, it's 4-3, we killed off a penalty and we're in good shape. But we were in the box way too much tonight."

The Flames gave up a season-high 65 shots and came close to setting a new team record for penalty minutes in a regulation contest.

"Clayton Brown played a solid game for us tonight in goal, but you can't give up that many shots and expect to win," Handy said. "For eight minutes of the third period, we didn't play well at all. It was just one of those things where you could see it slipping away. We kept marching into the penalty box."

After dominating John Carroll in the third period of Friday night's opener, scoring five goals in the final 20 minutes of a 7-1 win and outshooting the Blue Streaks by a 55-27 count on the night, Liberty gave up the first three goals of the third period to slip into a four-goal hole.

"It was more of a chess match tonight for two periods," Handy said. "When we stopped playing the chess match and went away from it, they took advantage. Short-handed goals were just killing us."

Despite having the tables turned and being outshot by more than a 2-to-1 margin for the game, Liberty (24-14-2) was still within striking distance at the end of the first and second periods. However, it wasn't able to carry much in the way of momentum over into the second and third stanzas.

Freshman forward Danny Logan trimmed the deficit to 2-1 with just four seconds left in the first off assists from Ryley Egan and Jackson Kuhn before Liberty tied it at 2-2 on the first of two goals by Egan, a quick wrist shot to the stick side of Ohio goalie Matt Michno set up by Logan and Kuhn.

However, the Flames allowed the Bobcats (28-7-2) to net the next two scores before trimming it back to 4-3 on a goal by Ryan Kerr from an impossible angle off assists from Cam Bakker and Christian Garland with 5:19 left in the second.

Then in the third, trailing by the lone goal, Kyle Garcia missed a golden opportunity to tie the game with the Flames on a penalty kill. Additional time in the penalty box put Liberty in a pinch as it allowed the Bobcats to score their second and third straight power-play goals to take a commanding 6-3 lead less than five minutes into the third.

Ohio, which advances to Sunday's third-round matchup with Iowa State, a winner over tournament host Robert Morris Illinois, extended its advantage to 7-3 before Egan finished off the scoring with his second goal on a putback of a shot by Brent Boschman in front of the cage with 4:29 to go.

"At the end, we didn't put out the effort that was needed in the third period," Handy said. "Ohio played better than us tonight and walked away with the victory. There were moments where we played with them, but obviously, they were the better team tonight."

He said the Flames' experience in the national tournament was a microcosm of their entire year.

"It was kind of a streaky season, to start out strong and back off again, up and down, up and down," Handy said. "That's kind of what we have to correct for next season. We've got to have a little more consistency, for sure."