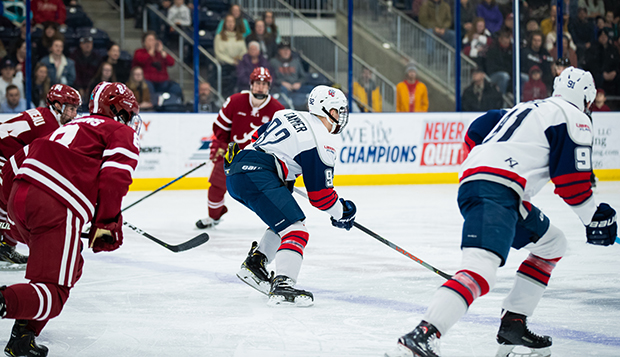 Liberty University's ACHA Division I men's hockey team, ranked second in the nation for the ninth consecutive computer poll, will be making its fourth straight trip to the ACHA DI National Championships — and 12th appearance overall — March 19-24 at the Comerica Center in Frisco, Texas.

The tournament seedings and brackets were released on Wednesday, factoring in autbids won by CHMA Tournament champion Indiana Pennsylvania and NECHL regular-season and tournament champion Niagara, which supplanted 19th-ranked Iowa State and No. 20 Pittsburgh in the 20-team field.

The Flames (31-4) are seeded second at nationals and will receive a first-round bye. They will face the winner of a first-round game between No. 15 UNLV and No. 18 Arizona State on March 20 at 6 p.m. (EST).  With a win, Liberty would challenge the winner between No. 7 Stony Brook and No. 10 Indiana Tech in the third round, set for March 22 at 6 p.m. (EST). After that, the four remaining teams will be reseeded for semifinal showdowns on March 23 with the championship game set for March 24.

All games will be webcast live on the ACHA's YouTube channel.

"From our perspective, the most important thing is to focus on each game that comes," Flames' 20th-year Head Coach Kirk Handy said. "We feel we have a special group of guys in the locker room and we need to focus on ourselves and the way we are executing going in and not worry about the other teams in the tournament."

Liberty, which won its third consecutive Eastern States Collegiate Hockey League (ESCHL) regular-season title, will compete for their third ESCHL Tournament title in four seasons this weekend in West Chester, Pa. They will hold their final home practice on March 16 before flying to Texas on March 17 to have plenty of training time in the complex that also serves as the practice facility for the NHL's Dallas Stars.

More than 1,500 players from 72 teams across all five ACHA divisions — men's Division I, II, and III, and women's Divisions I and II — will converge upon the Dallas-Fort Worth metro area from March 19-29 to compete in more than 100 national tournament games.

Liberty's ACHA DI women's hockey team will be contending for its third consecutive national title and fourth in the past six seasons from March 25-29 while the Flames' and Lady Flames' DII teams will be making their second appearances in the past three seasons from March 20-25 and March 25-29, respectively, with games played at the Comerica Center as well as the Children's Health StarCenter facilities in Plano and McKinney, Texas.