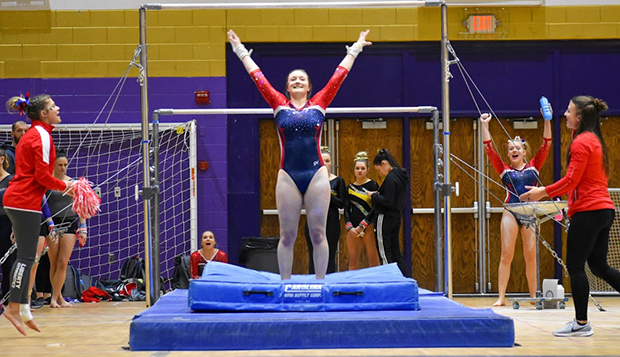 Lady Flames junior Mia Harvey smiles as she sticks her landing on the uneven bars, finishing 10th with a score of 8.25. (Photos courtesy of Seth Whitehurst)

The Lady Flames, who feature a roster of eight gymnasts, were coming off a third-place showing at their season debut at Ohio State. JMU's meet wasn't as large, with only nine schools and approximately 120 women competing. Liberty finished ahead of runner-up Virginia Tech as well as JMU, Virginia, William & Mary, the Naval Academy, West Chester, Temple, and Towson.

"It was an extraordinarily consistent meet, with a lot less errors this week, and we've added some new skills," Liberty Head Coach Tim Kappel said. "Usually, we would have two or three girls who would do the majority of the work. Some of our higher-placing gymnasts were new to the team and every single team member contributed to the team score. So it is very much more of a team effort right now."

Freshman Shae Whitehurst won the balance beam with a score of 9.3 while junior teammate Mia Harvey placed second with her 9.2 score.

Liberty posted four of the top 11 scores on beam overall.

"Jessie Lowe, our assistant coach, has been doing very well with them," Kappel said. "It is nice to have her in here, as an alumna who is very committed to the team."

"Shae is a freshman, so for her to have two really good events was a good moral boost for her to get back out there," Kappel said, noting that her junior career was hampered by injuries.

Harvey placed sixth in the All-Around competition with 34.35 points, followed by freshman Audrie Pack, who tied for 10th with her 33.4.

"We have a good combination of young girls figuring it out and older ones getting more consistent," Kappel said. "We're having a lot more top-10 and top-five finishes. With four freshmen feeling more comfortable, they showed good improvement from a couple weeks ago to help build some confidence going into nationals. We've got a five-week break here to get ready."

The NAIGC National Championships will take place from April 15-18 at the Providence, R.I. Last year, Liberty finished fifth at nationals in Daytona, Fla.

"This year will be a little different because you can only put four athletes in the finals of each event and they and count your top three scores," Kappel said. "That is going to help us a little bit because there are some huge teams, like JMU with 30-some girls. We're only competing with eight."

After being held in Fort Worth, Texas, in 2018, next year's NAIGC Nationals will move to Albuquerque, N.M.

"We are feeling great about next year, with the way this team is coming together," Kappel said. "If the freshmen keep improving with another year under their belts, we should be in good shape as we are bringing in a couple more talented recruits." 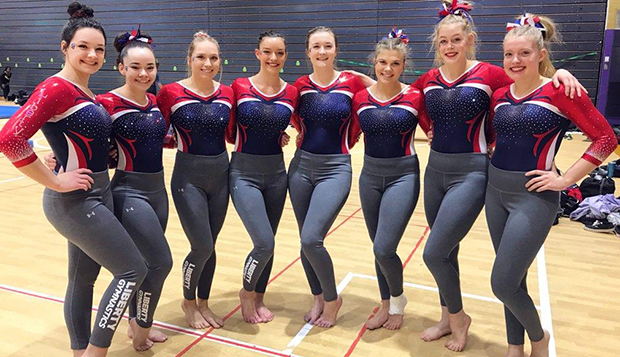