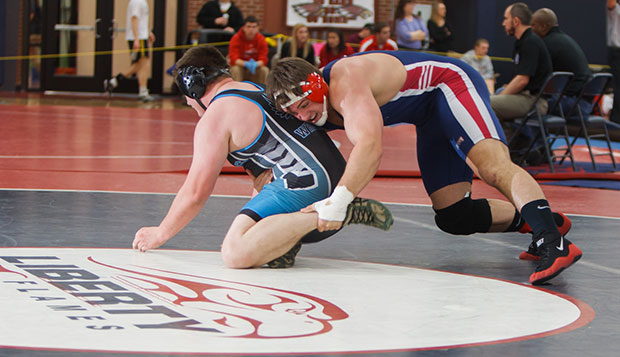 Andrew Wilson wrestles in the MAC tournament at the new Schilling Center. He won the 235-pound individual title.

Winning six of eight championship finalist matches out of 11 weight classes might be enough to satisfy most collegiate wrestling coaches.

Not Liberty University head coach Jesse Castro, who was hoping for a clean sweep for the Flames in Saturday's Mid-Atlantic Conference tournament championships held Saturday in the new Schilling Center.

"I felt pretty secure going into the finals, but I wanted a few more champions than we got," said Castro, who conceded that the team competed well as a whole . "I'm real pleased with the team's performance today, a little disappointed with a couple of the outcomes, but to their credit, they wrestled well."

The top six individuals in each weight class advance to the March 14-16 national championships in Allen, Texas, where the Flames will be represented by a total of 16 wrestlers.

"It's a precedent for us to qualify this many guys," Castro said. "Obviously, some guys have more experience going into this tournament than others, but coming out of that tournament, we're going to gain a lot of experience to some core kids in the future."

Liberty will be looking to improve on last year's third-place team showing after finishing second in the NCWA duals in Georgia on Jan. 19.

"We know it's going to be tough," Castro said. "There are two, three, or four teams up there that (could win it, including Cal State Baptist and Lindenwood, which won the national duals). It could be anyone's tournament."

Thompson, the defending NCWA champion, was barely tested in his first tournament back since the NCWA duals, receiving a first-round bye as the No. 1 seed and scoring first-period pins of Apprentice's Luke Hanson in 1 minute, 21 seconds in the semifinals and East Carolina's Greg Humphrey in 1:31 in the final.

"I've been out with an injury for the past six or seven weeks so it's just good coming in here and competing at this level," said Thompson, who has intentions of defending his national crown. "That's the plan, go down there and hopefully have a repeat. I've got to train for it these next two weeks really hard and go into it and let it all hang out."

He was impressed with the Flames' domination on their home mats.

"We all came out today and I feel like we all wrestled really well," Thompson said. "Nobody lost matches they shouldn't have lost. Guys really excelled. People are really wrestling well today and coming out and giving it everything they've got. Peter Crawford, who took seventh at this tournament last year at 149 won it this year."

After decisioning JMU's Trey Gregory 8-2 in the first round and recording a technical fall over Apprentice's Chris Kennedy, Miller, a freshman out of Liberty Christian Academy, defeated the Flames' Miguel Rodriguez 5-3 in the semifinals and another teammate, Chase Boontjer, 4-1 in the 157-pound final.

Ward defended his MAC title at 174 by sandwiching two first-period pins around a 6-2 semifinal decision over Longwood's Ethan Huey, needing just 19 seconds to deck JMU's Joe Miller in the final.

"He came in with an over-under and my arms are way longer than his," Ward said. "I had a good height advantage over him, so I just came under, locked it real tight and just back-tripped him straight to his back."

He was pleased with his performance and is eager for a shot at redemption at nationals in Texas.

"I did not place last year," Ward said. "I plan on placing high this year. We plan on winning it all."

Wilson, who finished runner-up at nationals last year at heavyweight before losing 15 pounds and dropping down to 235, concluded the tournament for the Flames with a 3-2 decision over JMU's Austin Fallon.

Wilson fell behind 1-0 in the first period when he was penalized for knocking heads.

"He was basically like tying up and bringing my head to his so I just kind of like let it happen and it looked like I head-butted him," Wilson said.

But he was awarded one point when Fallon was called for stalling and won the match with a riding point after Fallon escaped to tie it at 2-2 in the final 10 seconds.

"He was being really conservative the whole match and I kept pushing the pace so I got two stalling penalties out of him," Wilson said. "He needed an escape to tie it, but I also had a riding point on him for riding him for more than a minute (earlier in the period)."

He is looking forward to ending his five-year career on a winning note in Texas.

"That's the goal, it's the ultimate prize," said Wilson, who's from Alaska. "Hopefully, Aaron (Thompson) will defend his title and me and Royal will get titles. I think we have a pretty good shot at winning (the team trophy), but everybody's got to wrestle their best and a lot of things have got to go right."