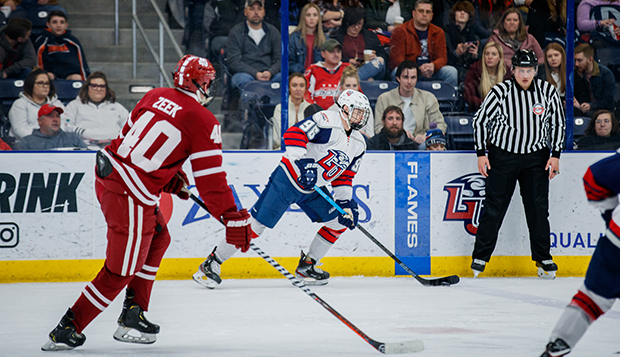 The 14-member senior class on Liberty University's second-ranked ACHA Division I men's hockey team, who played their last games at the LaHaye Ice Center on Saturday, helped transform the Flames from the cellar to the skybox over the past four seasons.

Liberty went from posting the worst record in the 14-year history of the program at the Division I level in 2015-16 (13-18-1) to the best this season — 31-4 after a second straight 9-1 triumph over Alabama. It was the Flames' 21st win without a loss at home this year, a program first, and the first time they eclipsed 30 wins in the regular season.

"Reaching those milestones is pretty cool to be a part of, especially for a lot of us seniors," forward Jordan Bochinski said. "Leaving our mark on the program, it's such an honor."

"We're not done yet, so it's not as sad as it could be," senior defenseman Chaydan Lauber added. "It was a great way to finish off the year."

"It was a lot of fun and a lot of great memories," Liberty Head Coach Kirk Handy added. "These guys were spectacular. They've had three regular-season conference titles and two tournament championships so far. They're the right guys who fit the culture, just an all-around great group of guys and I'm very proud to say they played for our program."

Most of the opening four minutes of Saturday's action was played in Liberty's end before Victor Blomberg started a quick counterattack, sending a crossing pass from along the left boards to fellow senior forward Cody Clarke skating down the slot. He finished the one-on-one with authority, beating Alabama goalie Patrick Ostermann glove-side into the upper netting at the 16:01 mark.

The Flames capitalized with a shorthanded goal before Alabama converted on the same power-play opportunity midway through the period.

Bochinski set up Lauber for what looked a sure-fire finish off a pass from the right circle. Moments after the near miss, Bochinski recovered the puck and sent a feed from the left side into freshman forward Brett Gammer, who jammed it in from point-blank range in the left crease for a 2-0 advantage at the 11:26 mark.

"(Lauber) was saying that it rolled off his stick, but I was happy that we could get a shorthanded one right after that on the same shift to make up for it, so I didn't hold it against him too much," Bochinski said.

However, less than 45 seconds later, Crimson Tide defenseman Timmy Kirkwood ripped a slapshot from the top of the right circle inside the right post, beating Flames freshman goalie Hunter Virostek.

At the 5:57 mark, senior forward Andy Clarke cleaned up a puck leftover on the right side of the goal line after senior defenseman Josh Bergen launched a shot from the high slot and senior forward Josh Hamilton backhanded the rebound behind Ostermann.

Seconds after the Flames killed off a penalty, Bochinski skated the puck around the perimeter and sliced into the right circle before sending another beautiful crossing pass to Gammer, who one-timed it in near the left post, extending Liberty's lead to 4-1 at the 11:57 mark of the second period.

Playing five-on-three hockey, Flames senior forward Quinn Ryan nearly scored twice. He received a pass from sophomore forward Josh Fricks in the left circle and blasted a top-shelf slapshot to make it 5-1 with 8:06 left before hitting the left post on a shot in the crease with Liberty still on a five-on-four.

Lauber had another breakaway chance set up by Bergen and Gammer rejected at the 3:38 mark, but stuck with the puck and slammed a backhanded rebound past Ostermann from right out in front to push Liberty's lead to 6-1.

"I couldn't buy one this week," Lauber said. "I had quite a few chances and the puck just kept bouncing off my stick so it was good to finally get one."

After some scrums that led to Alabama ejections, sophomore forward Arturas Laukaitis took a short pass from Fricks in the slot and lifted a short wrist shot over the blocker of Ostermann into the top left corner, stretching the Flames' edge to 7-1 just 16 seconds before the second intermission.

Then in the third, senior defenseman Basil Reynolds skated the puck around the right corner before finding sophomore forward Matt Bartel cutting into the slot, where he lifted a quick wrist shot into the top left corner, padding Liberty's lead to 8-1 with 12:01 remaining in regulation.

Finally, with 1:14 to go, freshman defenseman Colin Baird delivered the puck to Ryan, who used a toe drag move to deke his way into the slot before touching a pass to Bochinski in the left crease for an easy finish inside the left post and the final score.

"Quinn's a fun player to play with," Bochinski said. "He'll put the puck on your stick. We have a lot of skilled forwards and right now, with some injuries going on, some lines have been jumbled but our guys have done a great job in adapting to situations."

The Flames, who clinched their third consecutive ESCHL regular-season title on Feb. 7, will be seeded first and receive a first-round bye in the ESCHL Tournament at West Chester, Pa., before playing in Saturday's semifinals.

Handy said consistency will be the key for Liberty to win its third ESCHL Tournament in four seasons in the league and first ACHA Division I National Championship, March 19-24 in Frisco, Texas.

"Our guys, because of the experience we had last year, especially, know what it's going to take to get to the next level," he said.

"This has been one of the best teams I've ever been a part of and a lot of the guys would say the same thing," Bochinski added. "We believe and we know in that locker room that we're the best team in the country. The road isn't over yet. Tonight is a special night, but we've still got a lot of work left to go, so we're excited for it."

The Flames' senior class and coaching staff pose after their final game at the LaHaye Ice Center.