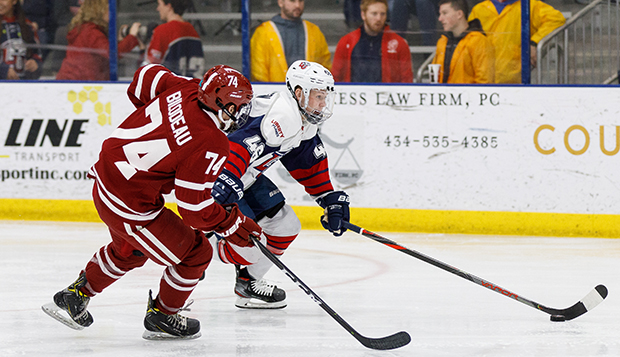 Liberty University's ACHA Division I men's hockey team flexed its depth chart muscles on Friday night with a dominant 9-1 rout of Alabama in the opening game of a regular-season series finale at the LaHaye Ice Center.

The Flames, ranked second in the nation, showcased their third and fourth forward lines and second and third defensive pairings extensively for much of the night. Liberty (30-4) eclipsed the 30-win mark for the third time in program history, and first time in regular-season play.

The scoring show began early when the Crimson Tide (5-24-1) attempted but failed to send the puck out of their own territory. Flames senior forward Jordan Bochinski intercepted the errant clearing pass and redirected the puck past Alabama goalie Patrick Ostermann inside the left post to give Liberty a 1-0 lead early in the first period.

Flames sophomore forward Josh Fricks left the game in the first few minutes after being slashed, but returned to get in on the scoring with over 12 minutes remaining in the opening period, threading his shot through the five hole for a 2-0 advantage.

Both teams' offenses were held scoreless for the remainder of the opening stanza.

"I thought we started slow in the first period," Liberty Head Coach Kirk Handy said. "I liked our second and third periods tonight."

Handy's players seemed to like the second and third periods as well. With a little over 12 minutes remaining in the second, the Flames capitalized on their first power play opportunity. Sophomore forward Arturas Laukaitis assisted senior defenseman Garrett Nelson who rocketed a shot from the top of the right circle over the shoulder of Ostermann.

Throughout the night, freshman goalie Cédric Le Sieur remained strong in the goal for the Flames, allowing only one score. Less than a minute into the final period, Le Sieur made his most impressive save of the night, stretching out to glove the incoming puck.

"The guys definitely made it easy for me today and they did a great job boxing guys out and giving me lanes to see the shots," he said. "Getting a lot of shots early in the game really let me get in the groove and from puck drop I felt like I was on my game."

While they excelled in the goal, the Flames struggled with penalties in the third period. Jacob Fricks was sent to the penalty box twice while fellow senior defenseman Chaydan Lauber also saw box time due to slashing.

But the Handy-led squad was able to capitalize off its own extra-man opportunities, netting three power-play goals on the night.

"Our power plays were excellent," Handy said. "Proud of our guys."

Before the Flames on-ice showcase concluded, the crowd was given a treat when Bochinski stole the puck near his own goal and skated coast to coast, finishing the beautiful play with a gorgeous shot to Ostermann's side.

Not to be outdone, Nelson took matters into his own hands on a late Flames power play, showing off his agile skating by maneuvering around an Alabama defenseman before dumping the puck off to Josh Fricks in the corner. Fricks barely allowed the puck to meet his stick before he scorched a high shot to the top corner of the net, sending the crowd into celebration.

Laukaitis finished off the scoring for Liberty with a high-speed, point-blank finish off a feed from senior forward Quinn Ryan.

The Flames will wrap up their best regular season in program history Saturday at 7 p.m., when they will honor their senior class before completing the two-game series against the Crimson Tide. 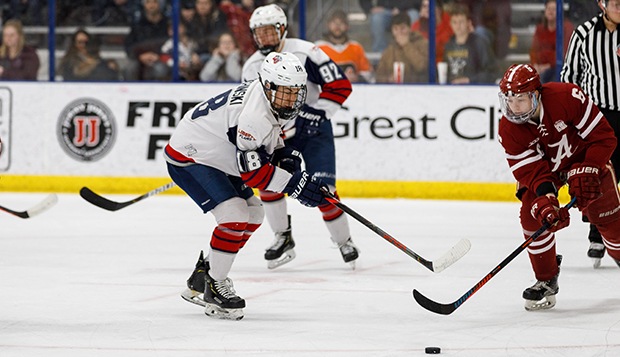