Flames to send out 14 seniors after home finale vs. Alabama 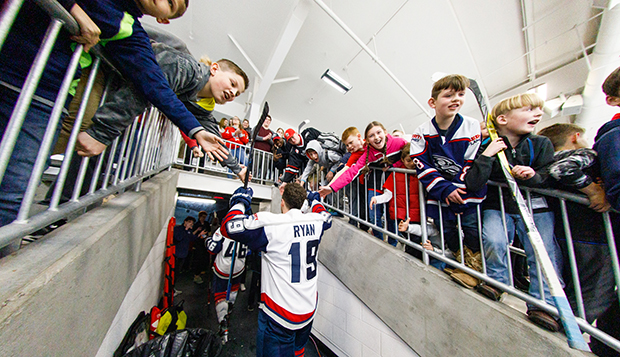 Forward Quinn Ryan and 13 other Flames seniors will walk through the tunnel at the LaHaye Ice Center for the final times of their careers this weekend. (Photo by Jenna McKenney)

A 14-player senior class that has helped Liberty University's ACHA Division I men's hockey team rise into the top echelon of the league over the past four seasons suit up for the last two home games of their collegiate careers when the Flames host Alabama on Friday and Saturday night at the LaHaye Ice Center.

Liberty, which remained at an all-time high No. 2 national ranking after dealing top-ranked Adrian College its first two losses of the season — in dramatic fashion with last-minute goals last weekend at home — will conclude one of the best regular seasons in program history with the non-conference rematch of its first road trip of the season, an Oct. 4-5 sweep of the Frozen Tide.

"It's not so much history, it's what we're doing now," Flames Head Coach Kirk Handy said. "This team, I'm proud of them. I'm really proud of the coaches, I'm proud of the players — guys coming in and playing different types of roles to kind of put us at our best, everyone working to do whatever they can.

On Senior Night on Saturday, Liberty will honor its outgoing seniors with a pregame red-carpet event on the ice that will also serve as a commissioning ceremony of sorts as the team prepares to travel to the March 7-8 ESCHL Tournament in West Chester, Pa., and March 19-24 ACHA Division I National Championships in Frisco, Texas.

While Chaydan Lauber returned from an injury and played a large role in the Flames' historic sweep of Adrian, and fellow senior defenseman Jacob Fricks will be back in action this weekend, senior forward Brock Thompson is still sidelined by injury and junior forward Cole Gammer missed Saturday's game and is questionable for the rest of the year.

"There's a lot of guys banged up in there," said Handy, who patrolled the bench Saturday night while walking in a boot to treat a broken bone in his foot. "This time of year, everyone's wounded, even the coaches.

"It's all about making sure we're well rested and ready to go," he added. "Our athletic trainers and strength coaches are going to be the most important people down the stretch."

Series record: Liberty extended its lead on the Crimson Tide to 9-3 by sweeping the past three series, winning by 6-0 and 8-3 scores in Pelham, Ala., in October.

Liberty scouting report: The Flames have outscored opponents by a 197-75 count on the season, getting extremely balanced production, led by 10 players with 24 points or more. That includes senior forward Quinn Ryan (21 goals, 39 assists), who is tied for fifth among ACHA Division I scoring leaders with 60 points, sophomore forward Josh Fricks (24G, 29A), who netted his team-high fifth game winner of the season in the opener against Adrian, sophomore forward Arturas Laukaitis (23G, 30A), who assisted both winning goals against the Bulldogs, and senior defenseman Garrett Nelson (10G, 38A), who converted his fourth game-winner in Saturday's rematch despite playing through an injury.

Alabama Scouting Report: The Frozen Tide have struggled to their worst season by far since joining the ACHA Division I ranks in 2014, when they debuted with a 23-3-3 mark. This year's record is a near reversal, with Alabama's only five wins coming against Robert Morris (Pa.) in a shootout and Illinois State and Marysville, beating both teams twice. The Frozen Tide is 1-12 away from home and has been outscored 154-79 on the season.

Offensively, Taylor Bowman (7G, 17A) and Nick Messina (6G, 13A) pace Alabama in points while fellow forward Jake Furry (13G, 5A) is its leading goal-scorer. 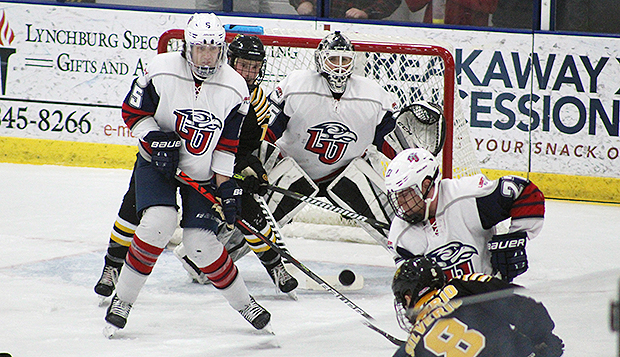