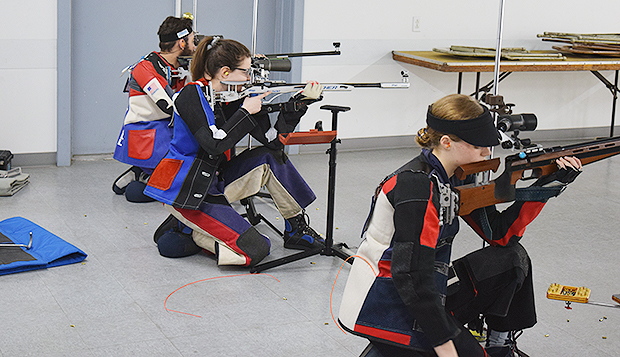 Liberty University's shooting sports program was well represented over the weekend at the Western Intercollegiate Rifle Conference (WIRC) championships, hosted by the University of Michigan in Jackson, Mich.

As a first-year member in the conference, Liberty's rifle team earned first- and second-place showings in the air rifle and smallbore regular-season and championship competitions and Head Coach Marlene Gray was named WIRC Air Rifle Coach of the Year.

Liberty also placed second to the Zips and ahead of the Bison in the Swanson Trophy regular-season WIRC competition, based on its monthly totals from October through February recorded on its home range at the Liberty Mountain Gun Club. Lady Flames freshman Katherine Gray (592.8) and Deane (585.8) were the most improved individual smallbore rifle shooters, and Gagne placed first in high prone average (97.4) and third in high kneeling average (90.5).

The same quintet of shooters finished runner-up to Akron (2,309) in the air rifle championship with 2,270 points, ahead of third-place Grand Valley State (2,263) in the 11-team competition.

Liberty will conclude its season at the March 20-22 NRA Intercollegiate Rifle Club Championships at Fort Benning, Ga., where they will compete in small bore and air rifle events before Feaga and Donoho and possibly Gagne will compete in the Junior Olympics National Championships set for April 13-18 in Colorado Springs, Colo. 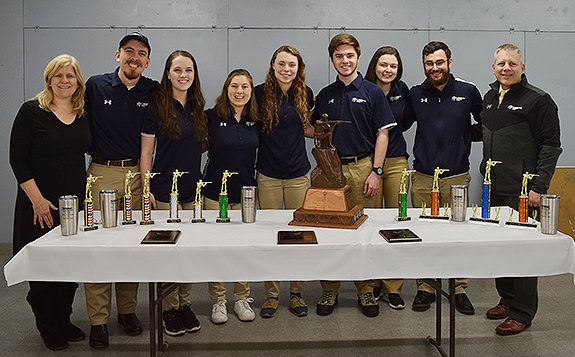 Liberty rifle team members and coaches with their hardware, including the Wiles Trophy (center).