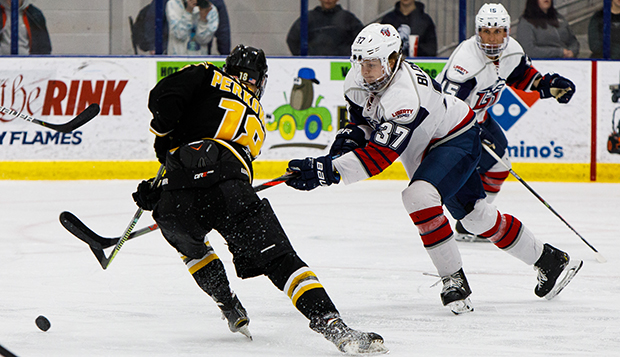 Senior forward Victor Blomberg was one of a few Flames to play through injuries Saturday. (Photos by Chase Gyles)

The No. 1 and No. 2 teams in the nation waged another spellbinding duel in Saturday afternoon's rematch at the LaHaye Ice Center, where Liberty University's second-ranked ACHA Division I men's hockey team used another last-minute goal to top No. 1-ranked Adrian College, 4-3.

"That was a crazy finish, absolutely unbelievable," Flames Head Coach Kirk Handy said. "Both teams battled hard and I was really happy with our guys. No one was running away with this game tonight. It was a battle like you are going to have at (the March 24-29 ACHA National Championships). Both games this weekend were very important for us to establish ourselves and gain confidence going into the tournament."

Liberty (29-4) overcame a 1-0 deficit at the end of the first period to seize 2-1 and 3-2 leads before senior defenseman Garrett Nelson sent the near-capacity College For A Weekend (CFAW) crowd into a state of bedlam by netting the game-winner with 43 seconds remaining in regulation.

"It's such a blessing to be able to play in this kind of atmosphere and in front of this crowd," freshman forward Brett Gammer said. "(On Friday), having the (Spirit of the Mountain) band there was a great boost for us, but both nights were awesome, with great fans. It was pretty electric in there."

The improbable sweep put an end to Adrian's (29-2) undefeated season and run of success against Liberty, which hadn't beaten the Bulldogs in nine previous tries.

Freshman goalie Hunter Virostek picked up where he left off on Friday night, keeping the Bulldogs at bay for the majority of the first period when the Flames killed off three penalties. On the third PK, he was most severely tested, repelling a barrage of shots from all around the cage before blocking a point-blank backhand by forward Mark Fratarcangeli at the right post.

"Our PK was unbelievable," Handy said. "(Assistant) Coach (Jonathan) Chung has done a great job with the personnel and we got some huge kills this weekend against them."

Adrian ended the scoreless tie with 49 seconds to play in the first period when forward Domenic Moore started a fast break up the left wing and slipped a shot from in the left circle past Virostek's glove inside the right post.

However, just 39 seconds into the second period, the Flames struck back to net the equalizer. Gammer — playing without regular linemate, senior forward and big brother Cole Gammer, who was injured in Friday night's opener — sent an outlet pass out of the defensive zone up to sophomore center Matt Bartel. He accelerated into the right circle before firing a wrist shot into the top right corner of the cage, beating Adrian goalie Michael Barrett.

Senior forward Cody Clarke's second goal of the season lifted Liberty to a 2-1 advantage with 4:26 left in the second period. He chased down a puck cleared out of the Flames' end by senior forward Zechariah Roberts and used a one-handed swoop motion to shuffle it off the stick of Barrett, who was blocking the five-hole. With a bit of puck luck, it rolled up off his shoulder and into the top right corner of the net.

"Cody's got a great attitude," Handy said. "He dressed last night and didn't see one shift, but with the injuries we have, you insert those guys and see what they can do and I'm so proud of them. (Clarke) got his opportunity and goes out there with instant energy and confidence and makes a play."

But, as was Adrian's, the Flames' lead proved fleeting as Bulldogs defenseman Steven Szekesy received forward Emanuel Silverio's feed from behind the net and knotted the game at 2-2 by ripping a shot from the point that slipped past Virostek through the five-hole with just 57 seconds left in the period.

Liberty needed less than three minutes to reclaim the advantage when senior forward Josh Hamilton won the puck along the left boards and sent a crossing pass to Nelson, who deked around an Adrian player before launching a shot that was blocked high into the air. Hamilton raced into the left crease and gloved the puck before putting it down and using a defenseman's stick to deposit a backhanded shot inside the left post for a 3-2 edge at the 18:07 mark.

Once again, the Bulldogs bounced back and converted the tying goal moments after their penalty kill, which ranks among the ACHA's best, extinguished the Flames' fifth power play of the day. Adrian mounted an odd-man rush and Silverio recorded his second assist with a short feed to forward Rainer Glimpel, who threaded his finish through the five hole with 13:56 left to play.

Liberty nearly reclaimed the lead two minutes later when senior defenseman Chaydan Lauber uncorked a shot from the top of the right circle on transition that clanged off the left post.

Gammer cleared the puck off the goal line to help secure the Flames' fifth successful penalty kill in as many chances with just under two minutes remaining in regulation.

"In games like this, playing against a really good competitor, everyone on the ice has got to buy in and be tenacious to get that puck away from our goalie," Gammer said. "Everyone on the ice was doing their part and that was why we were able to come away successful today."

Soon after, as the final minute approached, Liberty answered the crowd's chants and converted the game-winning goal on a quick counterattack with just 43 seconds to go. Nelson received a perfectly timed pass from Laukaitis in the right circle and ripped a wrist shot into the upper netted, igniting another jubilant celebration from the Flames' faithful.

"You could feel the energy when that pass went over and our whole team was just leaning over the bench on our toes, just ready to celebrate," Gammer said. "We've got great faith in Nelly's ability to put the puck in the net. He's obviously a really skilled guy with great vision, he's a very head-up player."

The Flames will conclude regular-season play next Friday and Saturday nights against Alabama before traveling to the March 7-8 ESCHL Tournament in West Chester, Pa. 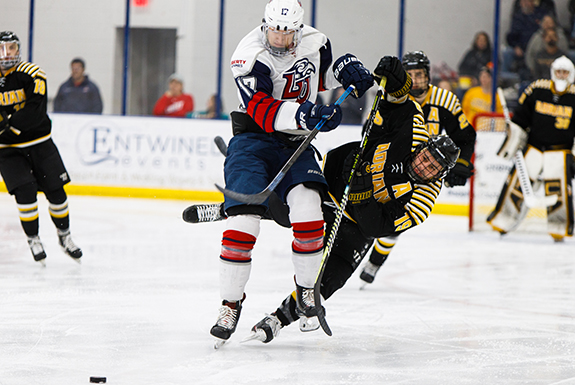