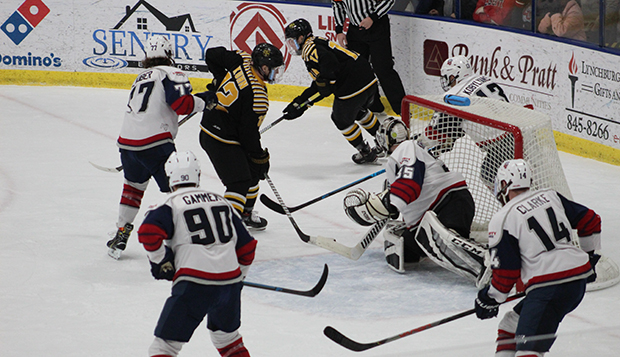 Liberty University's second-ranked ACHA Division I men's hockey team went toe-to-toe with No. 1 Adrian College for three periods in Friday night's series opener at the LaHaye Ice Center before staging one of the greatest wins in program history, ending the 2018 ACHA national champion Bulldogs' 29-game winning streak with a 2-1 triumph. It was the Flames' first win over Adrian in 10 tries.

"I'm super proud of our guys," Head Coach Kirk Handy said after Liberty's first win over a No. 1-ranked team since beating Ohio at LaHaye in 2012. "It was an incredible game tonight by both teams. We're banged up, I'm sure they're banged up, it's the end of the year and for our guys to play the way they did tonight … That's two great teams going at it and we battled through injuries and found a way at the end."

Sophomore forward Josh Fricks' power-play goal in the final minute or regulation off an assist from sophomore forward Arturas Laukaitis proved to be the game-winner and the Flames' defense stood tall in front of freshman goalie Hunter Virostek all night.

"It doesn't get any better than that," said Virostek, who made 38 saves. "I was definitely blessed to get this start. That was awesome, and I took advantage. When you get in this spot, you've just got to make the most of it and do your best."

Liberty (28-4) outshot Adrian (29-1) by a 46-39 margin on the night and Virostek made 38 saves to keep the Flames in the game, including several to help kill back-to-back penalties in a scoreless first period. Liberty went 4-for-4 on the PK against one of the most efficient power play teams in the ACHA. The Bulldogs have outscored opponents, 228-35, this season and are 122-8 over the past four years.

"They outplayed us in the first and Hunter made some big saves," Handy said. "Those were huge kills back-to-back and we found a way to get it done. Our PK was unbelievable tonight, Hunter played the best game he's played for us since he's been here and that was a huge part of it."

Competing in front of a packed house that included prospective students in town for College For A Weekend (CFAW) as well as a section reserved for Liberty's Spirit of the Mountain marching band that performed during breaks in the action, the Flames showcased a stingy defense that kept Adrian's potent power play in check and quickness, scrappiness, and persistence on attack to battle the undefeated Bulldogs down to the wire.

Moments after Virostek made back-to-back saves of point-blank Adrian shots midway through the second period, the Flames cleared the puck out to senior forward and leading scorer Quinn Ryan, who started a fast break with Fricks, eventually feeding him a pass from behind the cage as he cut into the crease. Bulldogs goalie Michael Barrett blocked the shot but could not cover the puck and sophomore forward Arturas Laukaitis sneaked in between two defensemen and put it away through the five-hole, lifting Liberty to a 1-0 lead at the 12:55 mark.

Virostek made a few more spectacular saves, on an Adrian power play in particular, before the Bulldogs finally broke through, tying the contest with 6:45 left in the period when forward Chris Donaldson skated through the left side circle and slipped a point-blank shot between Virostek's pads for the equalizer.

After starting the third period on a power play, the Flames killed another penalty at just over the 5:00 mark before going back on the man advantage when senior forward Jordan Bochinski was charged into in front of Liberty's bench. Virostek made a glove save of a shorthanded opportunity by the Bulldogs before Laukaitis was taken down from behind with 2:37 remaining in regulation, extending Liberty's power play.

The Flames had a few strong surges on net, with Bochinski chipping a short shot that glanced off the outside of the left post, before Laukaitis received a pass from senior defenseman Garrett Nelson and spotted Fricks cutting into the right crease. He sent him a beautiful crossing pass from the top of the left circle and Fricks tucked it past Barrett with 54 seconds to go, sending the capacity crowd into a frenzy.

"It was an incredible crowd, an incredible atmosphere here tonight," Handy said, noting that beating a team of Adrian's caliber in the regular season bodes well for its chances at the March 19-24 ACHA DI National Championships in Texas.

"That's the way nationals is going to be played, so we wanted to make sure when we built up the schedule that we got these quality games at the end of the year," he said.

"We take this game, we learn from it, we see what we did right and we go into playoffs and nationals with that," added Virostek, who will answer the call again for Saturday's 2 p.m. rematch. "We're going to get some nice sleep, get some hydration, and get some food in us and be ready to rock tomorrow."

Game 2 will again be webcast live by LFSN and carried on ESPN+. 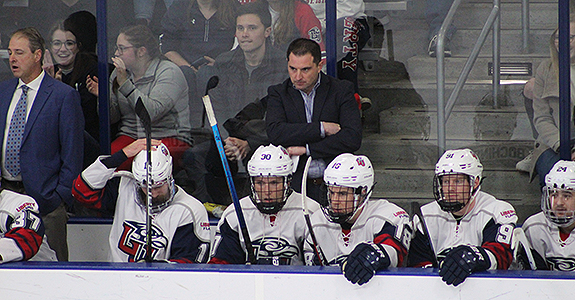