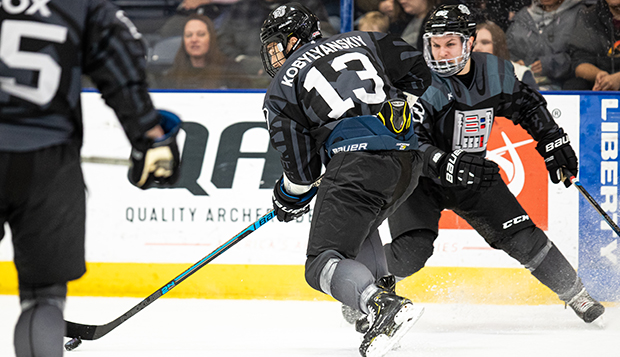 Flames Hockey fans have anticipated this weekend's showdown between Liberty University's ACHA Division I men's hockey team and Adrian College all season, and with a College For A Weekend (CFAW) crowd on hand, the atmosphere inside the LaHaye Ice Center will be supercharged for the arena's first-ever series between No. 1- and No. 2-ranked teams.

"It's a great opportunity for us to continue our journey with an exciting matchup here at home," Flames Head Coach Kirk Handy said. "We expect a great crowd on Friday night and our guys are going to embrace the opportunity. They are working hard and looking forward to it."

"At the end of the day, both teams are going to compete hard and leave it all out on the ice this weekend," Handy said. "We want to make sure our guys are ready to go and to compete with a sense of urgency for 60 minutes and that between now and nationals, we are getting better every game."

Freshman defenseman Dmytro Kobylyanskyi says the Flames are approaching the series against the Bulldogs with confidence.

"I think we have everything in our toolbox to beat any team," he said. "We just have to prepare and come ready and believe in each other and whatever God decides, whatever He desires will happen."

That said, he believes Liberty can control its own destiny by playing fundamentally sound hockey.

"We can't afford any penalties," he said. "We can't give them anything. If we start strong and everyone pitches in and does their job and plays their role, " the Flames will give Adrian good battles.

Beating the Bulldogs — in Friday night's opener and/or Saturday afternoon's rematch — would go a long way toward generating momentum for the postseason.

"Every game is important because going into nationals, we know we can't take any breaks or make any mistakes," Kobylyanskyi said. "We're going to have to be all-in and be ready to learn from everything."

All-Time Series: Adrian has won all nine of the teams' meetings at the ACHA DI level, including by 7-3 and 1-0 scores on Oct. 25-26 in Michigan. They swept the home and away series last season, including by 5-4 and 4-0 counts last February at LaHaye, where they held the Flames scoreless for the first time in more than five years. Previously, the Bulldogs swept a series at Liberty in 2010 and eliminated the Flames from the ACHA DI National Championships in 2012.

Liberty Scouting Report: The Flames are still not back to full strength from the injuries that have hampered them this semester, but they are getting closer, with senior defenseman Chaydan Lauber and junior forward Jordan Bochinski both expected to suit up for the first time this month.

Adrian Scouting Report: The Bulldogs were eliminated by eventual champion Minot State in last year's ACHA DI National Tournament before moving back atop this season's ACHA DI national rankings the week before they hosted the Flames in October and remaining there for the past 14 polls.

The Bulldogs have outscored opponents by a whopping 227-33 margin this season and feature incredibly balanced scoring with eight players totaling 35 points or more, paced by forwards Emanuel Silverio and Brendan Stenko, who have both scored 22 goals and distributed 20 assists. Forwards Connor Smith (24G, 15A) and Tyler Fyfe (18G, 21A) are tied for third with 39 points, with Fyfe netting a team-high five game-winning goals, one more than Stenko and Smith.

Coaches: Handy is in his 20th season as Liberty's head coach and has compiled an overall record of 459-184-29. Adrian's bench is patrolled by Gary Astalos, who is 127-7 in his fourth season at the helm.