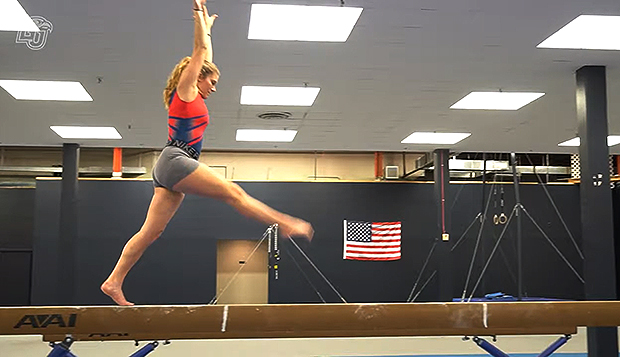 Lady Flames freshman Shea Whitehurst practices the balance beam at the gym in The Plaza. (Photo by Patrick Strawn)

Liberty University's women's gymnastics team enjoyed an auspicious debut at Saturday's season-opening meet, the Buckeye Blast hosted by Ohio State at Integrity Gymnastics in Columbus, Ohio. The Lady Flames, who feature four freshmen on their roster of eight gymnasts, placed third out of 25 teams in the competition, behind only Michigan and Penn State and ahead of the fourth-place Buckeyes.

"It was a huge meet, probably one of the biggest in the country outside of (NAIGC) Nationals," Liberty Head Coach Tim Kappel said of the championship meet set for April 15-18 in Providence, R.I. "Last year, Ohio State and Penn State and Liberty were all in the national finals, so three of the six teams from last year's finals were there.

"It's a different group win that we're relying on freshmen, but we're actually pretty happy," he said. "With this group we have now, everybody can contribute and help somewhere in some regard, whereas in the past we had two or three that could carry us."

"We were pretty pleased, considering it was the first college meets of their lives," Kappel said of the freshmen that included Shea Whitehurst and Caitlin Greiner. "They all contributed."

Junior Emory Cherry placed third on the uneven bars out of 115 contestants with an 8.55.

Harvey placed fifth out of 139 gymnasts on the balance beam with her score of 9.0 and was also eighth on the floor exercise with an 8.8 and 11th on the uneven bars with a 7.8. She would have placed higher in the All-Around but an accident on the vault lowered her score.

Senior Sydnie Phillips tied for 14th on the vault with her 8.9 score while sophomore Lindsay Esquirell tied for 13th in the floor exercise with a score of 8.6.

"Starting off with a really hard meet gives us a better perspective on where we need to be," he added. "We had a lot of unforced errors, so we were happy with third place as a team. We could have very easily been in second place if not won it all."

The Lady Flames will compete again at a smaller meet hosted by JMU on Feb. 29, their last event before nationals.

"We are happy with the start and are definitely looking forward to the next couple of months to see where they come out at nationals," Kappel said.

He said the team's recent success has benefited recruitment for the future, which is looking bright.

"We are getting approached a lot more by people who are starting to recognize our program, so recruiting is becoming a lot easier," Kappel said, noting he has already received a fall commitment from Pennsylvania and is working on landing a few more.

Next year, the team will have a permanent 7,000-square-foot on-campus facility for the first time and plans to host an NAIGC meet.