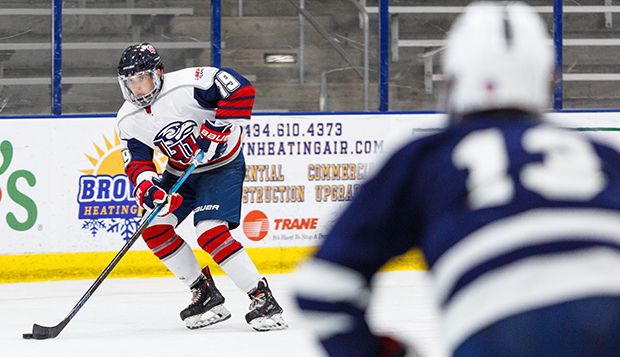 Freshman forward Luke McFarlane skates past a Penn State player in an early-season game at Liberty. (Photo by KJ Jugar)

"It was awesome," Flames Head Coach Ben Hughes said. "I was proud of how the guys played the whole weekend. Rowan gave us all we could handle on Sunday. It came down to the last couple minutes and our guys bore down. It was a good feeling. It took two years of heartbreak, losing to Penn State in the finals the past two years. We were more experienced and our maturity level was better."

Against Maryland, sophomore goalie Dakota Cyhaniuk started between the pipes and improved to 17-0. Offensively, the Flames got two goals from Carter and one each from McFarlane, graduate defenseman Drew Crilly, sophomore forward Joshua Malin, and George, who capped Liberty's scoring with a power-play goal with 7:50 remaining in regulation.

Junior forward Blake Flanders, who was designated the MACH regular-season MVP, started the scoring against the Blue Hens and added a second goal before freshman forward Jamie Ross gave the Flames a 3-0 advantage with 1:31 left in the first period. Graduate forward Jerrell Campbell padded Liberty's lead to 5-1 with two goals in the second before freshman forward Christian Sorenson, sophomore forward Charlie Wilkie, and George concluded the Flames' scoring.

Rowan, seeded third, advanced to the final by upsetting second-seeded Penn State in the semifinals, scoring a tying goal in the last second of regulation and a winning goal in overtime.

"You could tell that they really had a lot of momentum that definitely carried over into the final," Hughes said.

But Partridge, who started Saturday's win over Delaware, got the call again for Sunday's final and kept the Profs in check for the better part of the contest.

"We have two Grade A goalies, two of the best in the league, which is a good problem to have," Hughes said. "We feel extremely confident that we can win with either goalie in net."

He said the tournament was excellent preparation for what the Flames — who bypassed the Southeast Regional tournament by ascending to No. 1 in the final rankings — can expect more of the same at the ACHA DII National Championships, set for March 20-25 in Frisco, Texas.

"We might have to go 3-0 in our pool there to advance to the Final Four, so every game matters," Hughes said. "After we won (Sunday), it was reminder that everyone plays a role and makes a difference, on the ice and in the team culture of the locker room, which accumulates in winning championships."