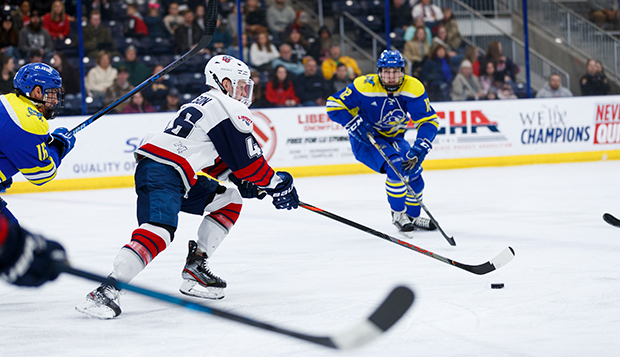 "I thought we had our game tonight and played an effective 60 minutes of hockey," Liberty Head Coach Kirk Handy said. "We played with a better sense of urgency overall and sense of purpose for 60 minutes tonight."

The Flames (27-4, 18-2 ESCHL) scored two power-play goals on five chances and completed seven of eight penalty kills to pull away from the Blue Hens in decisive fashion after needing an overtime goal to prevail in Friday night's opener.

"They outshot us, 30-27, but we made the most of our opportunities," Handy said, noting that Liberty won 35 faceoffs to Delaware's 23. "One thing we could have done better tonight was play with more discipline. But our PK did a great job tonight and our power play, which has been working hard, scored twice."

Junior forward Cole Gammer ignited the Flames' attack by netting the game's first two goals, the first off of a pretty assist from senior defenseman Garrett Nelson and the second on a power play.

Delaware got one back on its only power-play goal, capitalizing quickly on a five-on-three advantage late in the first period, before finished a feed from fellow sophomore forward Arturas Laukaitis with 1:00 remaining in the second to extend Liberty's lead to 3-1.

Senior forward Quinn Ryan, who notched the game-winner on Friday night, stretched the Flames' lead to 4-1 off an assist from Nelson with the teams skating four-on-four at the 12:57 mark of the third. Moments later, Laukaitis converted a power-play goal to make it 5-1 before senior defenseman Josh Bergen capped the scoring with 8:34 to go, seconds after another power play expired.

Freshman goalie Cédric Le Sieur made 28 saves to improve to 12-1 and improve his 2.10 goals-against average and 90.9 save percentage.

"Cédric made some great saves," Handy said. "He played well for us and offensively, we were able to spread it around."

The sweep sets the stage and gives Liberty momentum heading into a long-awaited rematch with top-ranked Adrian College, a rare showdown between No. 1 and 2 teams in the ACHA and first-ever at the LaHaye Ice Center, next Friday at 7 p.m. and Saturday at 2 p.m. 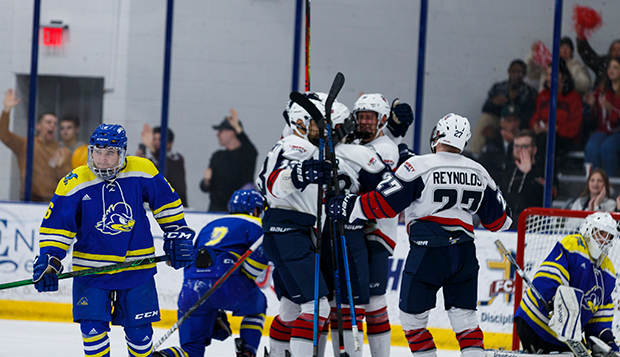 The Flames celebrate a goal against the Blue Hens in their Jan. 17 game at the LaHaye Ice Center.