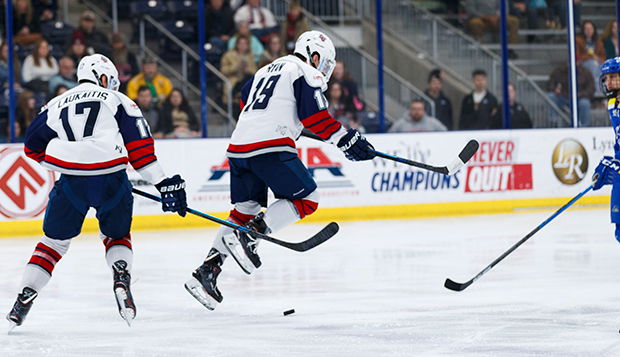 Flames forwards Arturas Laukaitis (17) and Quinn Ryan (19) skip up the ice against Delaware in the Jan. 17 spring semester opening 5-2 win at the LaHaye Ice Center. (Photo by Ross Kohl)

"It was a good, quick strike off and a nice play off an assist from (sophomore forward) Artie Laukaitis that won it for us," Flames Head Coach Kirk Handy said. "We were able to maintain control off the faceoff and Art took a pass from (senior defenseman) Garrett Nelson and passed to Quinn who went in and shot it in from 20 feet out on the left side."

Playing on Delaware's Olympic-sized ice, Liberty lacked its usual spark from the outset, trailing 1-0 after the opening period, and again in a scoreless third. Seven of the game's nine goals came in the second stanza.

"We don't feel that we played well tonight at all," Handy said. "We were tentative in the way we approached the game tonight and we aren't satisfied. There has to be a sense of urgency throughout 60 minutes of hockey to where we want to compete the whole time. Right now, it's got to get better."

Delaware ended a scoreless tie with a power play goal at the 3:53 mark of the first period before sophomore forward Josh Fricks netted the equalizer just 1:02 into the second on a scramble beside linemates Laukaitis and Ryan in front of the net.

The Blue Hens seized their last lead at 2-1 with 10:09 left in the second before sophomore forward Matt Bartel answered off a putback at the 8:58 mark, tying it at 2-2. Moments later, off the ensuing faceoff at center ice, Laukaitis controlled the puck and skated it just across the blue line before unleashing a slapshot that gave the Flames their first lead before Delaware tied it back up, 3-3 with 7:23 left in the second.

Ryan set up junior forward Cole Gammer with a beautiful assist on Liberty's only power-play goal at the 4:04 mark, but the Blue Hens again knotted the score at 4-4 with 2:39 to go.

"In the second period, we had some good scoring chances, but we also missed some assignments in the defensive zone and they were able to take advantage," Handy said. "Those are things we will need to clean up for (Saturday night's rematch) and we'll be ready to go."

Freshman goalie Cédric Le Sieur will get the start in Game 2, with the puck scheduled to drop at 5:15 p.m. and the game streamed live on Delaware Hockey's Facebook page.