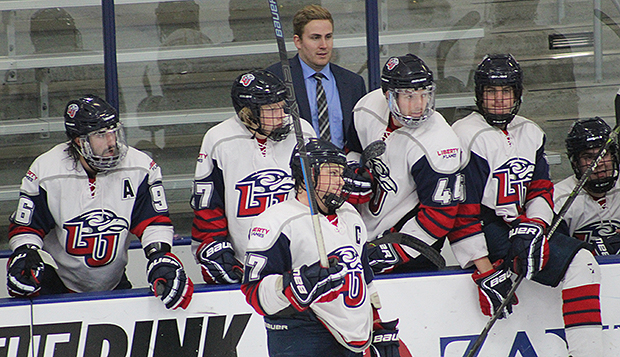 The Flames (12-7) seized a 4-0 advantage in the first five minutes of the second period of the opener before withstanding a furious comeback attempt by the Captains (13-6), who outscored Liberty 3-1 in the third.

Kenny Fogarty, who started the scoring midway through the first period off an assist from fellow freshman forward Christian Kline, added an unassisted insurance goal with 36 seconds remaining in regulation. That proved to be the difference when CNU's Brandon Day answered with an unassisted score in the final nine seconds.

Saturday's rematch was a back-and-forth battle, with CNU rallying to tie it at 2-2 and 3-3 before Chisholm netted the game-winner at the 9:01 mark of the third period off assists from Fogarty and junior defenseman Thomas Kazmierczak.

Liberty started the scoring just 43 seconds after the opening faceoff when Kline finished an assist from senior forward Andrew Barlass, who extended the Flames' advantage to 2-0 less than four minutes into the second period off a feed from Kazmierczak.

CNU rallied for two goals in a span of 85 seconds to knot the contest before Jordan Chamberlain lifted Liberty back on top, 3-2, by putting away assists from Michael Moore and Chisholm with 7:55 left in the second.

The Flames, who sat at No. 19 in the South Region in the last ACHA DIII rankings, will travel to face Georgia Tech in a non-conference clash this Friday at 10 p.m. and Saturday at 3:40 p.m. before traveling to Chesapeake, Va., to compete in the ACCHL Tournament from Feb. 21-23.