Flames ready to wrap up ESCHL regular season at Delaware 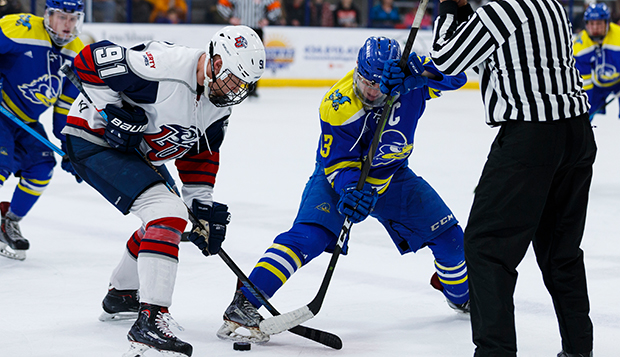 Against NYU, the Flames were down four forwards and two defensemen by the end of the opener. They will again be shorthanded with only 20 players making the trip to face the No. 21 Blue Hens, who are on the bubble for earning an at-large bid to nationals.

"We've had to shuffle some things around here with not only our forward lines, but also our power play and PK, and our guys have adjusted well," Liberty Head Coach Kirk Handy said. "Life's all about making adjustments when things like (injuries) happen. It's been a long season, a journey we've been on since August."

He is hopeful the Flames can continue to build on their success as they head into the home stretch, with back-to-back home series against No. 1 Adrian and Alabama in late February before traveling to the March 6-8 ESCHL Tournament in West Chester, Pa.

"Our goal is to finish strong, and we are going up (to Delaware) ready to go for both games," Handy said. "We want to carry on the momentum of getting better every time we're out there. It's refining the things that we did well last weekend and trying to get better at those things that we didn't do well."

Liberty scouting report: While the Flames are undefeated in the friendly confines of the LaHaye Ice Center this season, they are only 8-4 on the road. They will rely on their depth this weekend, as well as their speed, playing on Delaware's Olympic-sized ice.

Senior forward Quinn Ryan (19 goals, 35 assists), who is tied for fifth in ACHA Division I with 54 points, paces the Flames' attack, followed closely by sophomore linemates Josh Fricks (21G, 27A) and Arturas Laukaitis (20G, 24A). Fricks is who is one of five Liberty players with three game-winning goals along with junior forward Jordan Bochinski (14G, 26A), senior defenseman Garrett Nelson (9G, 30A), junior forward Cole Gammer (16G, 14A), and sophomore forward Matt Bartel (9G, 14A).

Christopher Ponticello is Delaware's only active goalie that played in the fall semester, logging over 1,600 minutes and posting an 18-10 mark with a 3.41 GAA and 91.0 SP.

Coaches: Handy is in his 20th season as Liberty's head coach and has compiled an overall record of 457-184-29. Todd Mittlemeier was promoted from assistant to become Delaware's head coach last January and has posted a 32-23-1 record to date.