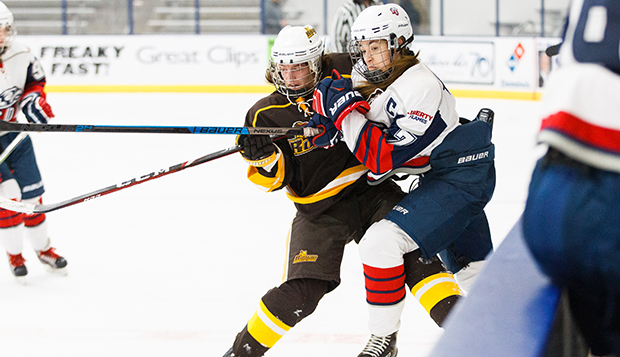 Arnosti scored Liberty's first two goals in Game 1, the first off assists from sophomore forward Hope Stengler and senior defenseman Holly Turner with 8:41 left in the first period. Sarah LaPorte extended the Lady Flames' lead to 3-0 with an unassisted goal midway through the second before assisting a fourth goal by senior forward Brynlee Anderson. Hegele then capped the scoring off assists from LaPorte and junior defenseman Alexis Early with 8:02 remaining in regulation.

On Sunday, Arnosti again ignited the offense with an unassisted goal at the 14:48 mark of the first period. After junior forward Julie Hoffmeier padded Liberty's lead to 2-0 off an assist from freshman forward Morgan Whitehorne, Hegele scored three of the final four goals, capping the scoring with 3:47 to go off a feed from Arnosti, who had netted the fifth goal unassisted with 10:57 left.

The game was only slowed by two penalties, both assessed to the Vulcans.

Sophomore goalie Madeleine Snook saved all 33 shots she faced in the series to post her third and fourth consecutive shutouts and sixth of the season for the Lady Flames.

Liberty, ranked second in the Southeast Region, returns home for a regular-season-ending series next weekend against Michigan-Dearborn, ranked fourth in the West Region, at 8:15 p.m. Saturday, Feb. 22, and 12:30 p.m. Sunday, Feb. 23, at the LaHaye Ice Center.