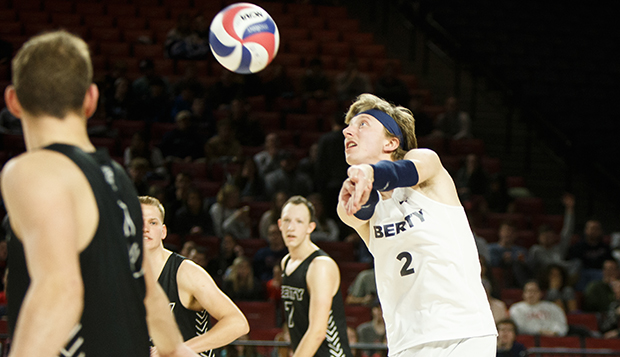 "They played really consistent throughout the whole day and didn't have a ton of dips," Flames Head Coach Kaleb VanDePerre said. "When we do that, we're going to be super dangerous. Our passing was what won us the tournament. We were in system 90 percent of the day."

Sophomore middle hitter Lucas Marine spiked a kill and stuffed two blocks to start the second game against the Hokies before junior outside hitter Sean Taggart served an ace and sophomore outside hitter James Morton added a kill off a Virginia Tech block for an 8-3 advantage. Sophomore setter Tommy Speelman then tapped a winner before setting up Taggart for a kill and serving an ace to stretch the lead to 14-8 and junior opposite hitter Joshua Knapp spiked a left-handed kill from the left side.

After a kill by Marine off a short assist from Speelman and a service ace by graduate Kaden Knepper, sophomore middle blocker Ben Dowd had a one-time winner and a stuff block.

Knepper, in his first action back with the Flames after serving as a graduate assistant on Liberty's NCAA Division I women's volleyball team in the fall, completed his service run with another ace.

"Kaden is back and thank God because he adds a whole new dimension to our team," Marine said. "We are more physical, more aggressive now, and we're playing with more confidence and it shows. Our passing was great. It was incredible."

Speelman set up Taggart and Marine for back-to-back spike kills to close out the match.

"Especially in the later half of the tournament, I was really proud of the guys," VanDePerre said. "We played a good JMU team and a good Virginia Tech team and took care of business. It's a good step forward but we've got a lot of work to do to keep reaching our goals. They're starting to take responsibility and put in the work that it really takes to be successful."

The Flames will find out where they stand national when the first National Collegiate Volleyball Federation (NCVF) rankings come out this week.

"All around, we were playing well," Marine said after the championship sweep of the Hokies. "I would say we respect them the most and they more fun to play because it's always competitive, so it is our biggest rival. The whole day we wanted Virginia Tech. We were just waiting for this rematch and we got it. We're going to be ranked better after beating them because they are going to be highly ranked, too."Next weekend, they will travel to Indiana to play against 15 of the top teams in the nation in the annual Hoosier-Illini Classic.

"The best teams in the country will be there from both sides, the East Coast and West Coast, as well as the Midwest," Marine said.

"On the court and off the court, we've got a real special group so I'm excited to see what happens," VanDePerre added.

Liberty's Division II team advanced to the final three Saturday before losing to both the Hokies' second and third teams to finish third. The Flames will need to stay in the top three and not place behind any team other than Virginia Tech at the March 22 ECVA South Tournament, also hosted by Liberty, in order to clinch its East Coast Championships bid.

That is a qualifier for the NCFV National Championships, set for April 9-11 in Kansas City.