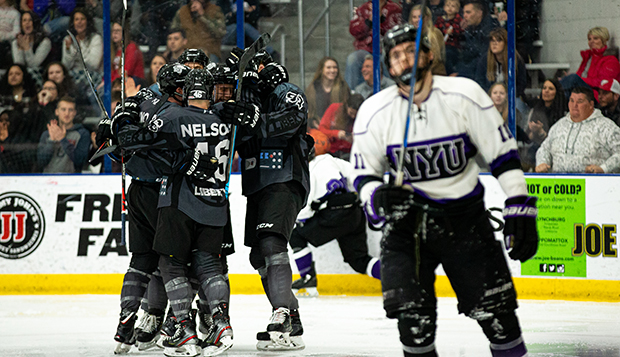 The stars came out on Saturday night, both in the LaHaye Ice Center stands in celebration of Liberty University's ACHA Division I men's hockey team's second "Star Wars Night," as well as on the ice, where the Flames again shined brightest in the third period of a 6-3 victory and series sweep of ESCHL rival New York University.

"It was a great crowd tonight," Flames Head Coach Kirk Handy said. "Hats off to our (Club Sports) events staff. They do a fantastic job and the atmosphere in here tonight was fantastic. The crowd was fantastic. It made for a really fun night."

"It was really awesome," Liberty sophomore forward Josh Fricks added. "We love it when it's packed like this. It's kind of like a Midnight (Mayhem) game, but it's a little earlier, which is nice. It's really fun to play in."

The team from the Empire State appeared to thrive in the hostile environment early on before the Force seemed to switch sides and the second-ranked Flames (25-4, 16-2 ESCHL) shifted momentum on the ice.

With 5:02 left in the first period and the Violets (8-10, 6-8 ESCHL) on a six-on-four advantage due to a delayed second penalty against Liberty, NYU forward Scott Mulligan lifted a backhanded putback in the left side of the slot over freshman goalie Hunter Virostek for a 1-0 lead.

All five Flames skaters on the ice played a role in the equalizer at the 2:39 mark, with freshman defenseman Dmytro Kobylyanskyi and senior defenseman Garrett Nelson clearing the puck behind their own cage before sophomore forward Arturas Laukaitis sent it to senior forward Quinn Ryan, who started a fast break up the left wing. Ryan worked a give-and-go with Fricks, who set up Ryan for a point-blank, open-net finish in the left crease.

"We needed a goal to get everyone going," Fricks said. "Artie (Laukaitis) made a really good chip and Quinn picked it up. As soon as I saw their defenseman go down, I knew Quinn was going to make a perfect pass and he'd be ready for it to come right back to him."

Senior defenseman Basil Reynolds then led Liberty's bench in a signature "Star Wars Night" goal celebration, channeling Darth Vader to put his collective teammates in a choke hold before releasing them from his grip as they fell simultaneously to their backs.

Nelson, who had a couple narrow misses on charges on net in the first period, finally cashed in for the go-ahead goal late in the second. He chipped the puck into the upper netting off tic-tac-toe cross-crease passes from senior forwards Ryan Cox and Victor Blomberg for a 2-1 Liberty lead with 5:22 to go in the period.

"In the second period, we started playing the game the way that we want to play and then in the third period, we were able to score on the first power play to go up 3-1, so I felt the game started to turn for us in a positive way," Handy said.

With the Flames on a five-on-four to start the third, Laukaitis — who had two of his three goals on the power play in Friday's opener — capitalized with another slap shot from the top of the left circle into the top-right corner off assists from Nelson and Ryan at the 18:53 mark.=

"(Laukaitis) has a rocket," Fricks said. "Two weeks ago in practice, we didn't know where it was going, but now he's got it dialed in right into the corner and he's not missing. It's fun to watch."

Moments later, sophomore forward Matt Bartel received a cross-ice feed from Reynolds deep in the right circle before trapping and firing a laser of a wrist shot into the top left corner of the cage for a 4-1 advantage at the 17:15 mark.

"That was a beautiful pass," Handy said.

Seconds after the Flames killed a penalty, NYU leading scorer Mac Brice finished a crossing pass in the left crease to cut the deficit to 4-2.

Just four seconds into another Liberty power play, Laukaitis launched another missile from the top of the left circle, extending the Flames' edge to 5-2. Freshman forward Brett Gammer won a right-circle faceoff to his brother, junior forward Cole Gammer, who sent it to Nelson at the right point for a quick pass across to Laukaitis, who beat Salisbury again top shelf with 13:33 remaining in regulation.

"That was unbelievable, him and Garrett back there," Handy said. "Art's got a hot stick right now. He's playing really, really well. He needs to keep shooting the puck."

NYU pulled its goalie Salisbury for a five-on-four advantage, a move that backfired when Cole Gammer, who capped the scoring with a shorthanded goal on Friday, intercepted a pass in his own slot and unleashed a shot from 75 feet that glanced off the left post and in. That stretched Liberty's lead to 6-2 at the 5:56 mark when Brandon Ritchie deflected in Brice's shot from the left circle in the final 1:42.

"The power play came up big and in that third period, teams can't hang with us with our conditioning," Fricks said. "We can play too fast for them to keep up."

Liberty, which outshot NYU 41-25 to complete the sweep, concludes ESCHL regular-season play next Friday and Saturday nights at Delaware.