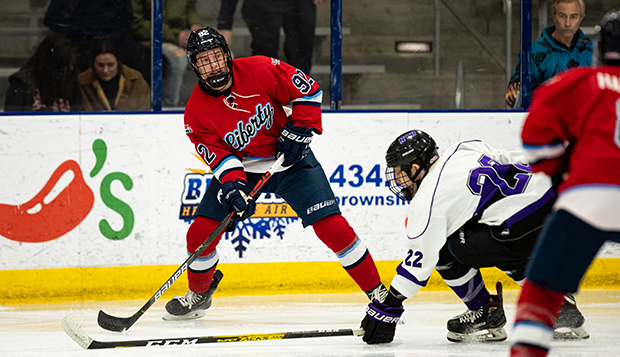 "It's next-man-up mentality," Head Coach Kirk Handy said after the second-ranked Flames broke open a 4-3 contest by netting four unanswered third-period goals on the No. 24 Violets. "We've got a locker room that we believe in there and we've just got to keep rolling."

With the win, Liberty (24-4, 15-2 ESCHL) clinched its third straight ESCHL regular-season title and autobid to the March 19-24 ACHA Division I National Championships in Texas.

"You never know what lineup you're going to have at the national tournament and you have to execute no matter what," Handy said. "We executed in the third, (but) we have to be better in the first two periods."

"Overall, we have a lot of things still to get better at," added sophomore forward Arturas Laukaitis, who polished off his first hat trick at Liberty with two third-period power-play goals. "Line combinations, power play, penalty kill, defense, everything is kind of mixed up right now. We're trying to adjust to each other and do a good job."

Flames senior forward Quinn Ryan, who moved into third place on Liberty's all-time scoring list in last weekend's sweep of Rhode Island, started the scoring with 13:13 left in the first period. After receiving a cross-ice fast-break feed from sophomore forward Josh Fricks and a touch pass from Laukaitis, he threaded a backhander through the five hole of NYU goalie Adam Salisbury on a breakaway.

With Liberty on the power play, freshman defenseman Colin Baird capitalized in the left crease by firing a rebound of Fricks' shot into an open net for a 2-0 edge at the 10:07 mark.

The Violets (8-9-1, 6-7 ESCHL) cut the deficit to 2-1 on a man advantage when defenseman Brian Taccone fed forward Brandon Wilky in the right crease where he lifted a wrist shot over the shoulder of Flames sophomore goalie Tyler Myers with 4:29 left in the first.

Laukaitis put away a two-on-one opportunity with three seconds to play in the period by receiving a pass from Fricks and ripping a shot from the left circle inside the near post, stretching Liberty's lead to 3-1.

"Art's got a great shot and if he keeps shooting the puck, he's going to help our team out significantly," Handy said. "Art played a fantastic game today for us and in a game where we're real shorthanded, he came to play well."

NYU struck back to within 3-2 on its second power-play chance when forward Brandon Ritchey skated from behind the right post and sneaked a low shot through the crease that deflected past Myers with 18:08 left in the second period.

Senior forward Andy Clarke, working on a new line combination with graduate forward Zechariah Roberts and senior forward Josh Hamilton, gave Liberty a 4-2 lead at the 4:31 mark. He received an entry pass from Hamilton, who showcased his speed by skating the puck out of the defensive zone up the right wing, and roofed a short backhanded wrist shot from deep in the right crease.

"Veteran line, all three seniors, guys who know what it takes to get it done and they played well," Handy said.

However, moments after a Liberty penalty kill, NYU again trimmed the Flames' edge to 4-3 when forward Richie Doherty deflected Taccone's shot from the high slot past Myers with 2:13 left in the second period.

The Flames, who outshot the Violets, 39-21, padded their lead to 5-3 at the 16:06 mark of the third when Clarke chased down the puck behind the goal and sent a pass back to Roberts in the left circle where he spotted Hamilton cutting down the right circle for a top-shelf finish.

Senior defenseman Garrett Nelson then skated the puck behind the cage before setting up Laukaitis in the high slot, where he demonstrated his pinpoint accuracy by firing a wrist shot through a screen set by freshman forward Brett Gammer into the upper netting to extend the gap to 6-3.

With 9:31 left and the Flames on a five-on-three power play, Laukaitis capped his hat trick by launching a third consecutive slap shot from high in the left circle off a Nelson feed from the right circle.

Finally, with 4:53 remaining in regulation and NYU on a man advantage, Gammer made a spectacular move as he crossed the blue line and sent a cross-crease pass to junior forward Cole Gammer as he crashed through the right circle for a sliding top-shelf finish past Salisbury.

"I hope coach is going to keep them together because there's definitely some chemistry there," Laukaitis said.

"That was a big shorthanded goal," Handy added. "We weren't happy with our play through 40 minutes. In the third period, we responded well."

The Flames will entertain the Violets in Saturday's 7 p.m. rematch, when Liberty Hockey holds second "Star Wars Night" at the LaHaye Ice Center.