Flames can clinch ESCHL title in stellar battle against NYU 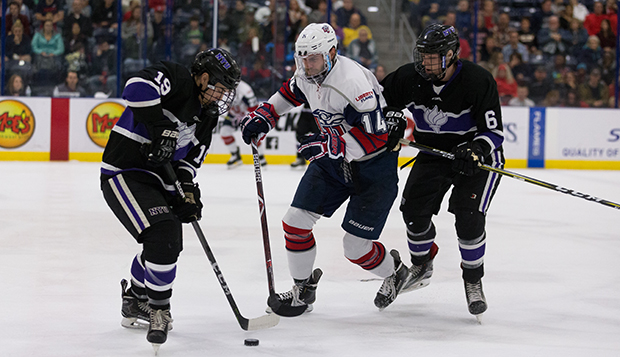 This weekend, Liberty University's ACHA Division I men's hockey team will entertain New York University for a showdown of intergalactic proportions at the LaHaye Ice Center.

As the Flames seek to clinch their third consecutive ESCHL regular-season championship and autobid to the March 19-24 ACHA DI National Championships in Frisco, Texas, with a sweep of the Violets, characters representing the Empire and Jedi forces will patrol the concourse for Saturday night's rematch on Liberty Hockey's second "Star Wars Night."

Liberty, which remained at an all-time-high No. 2 plateau in this week's ACHA DI rankings, concludes ESCHL play next weekend at No. 21 Delaware before hosting undefeated Adrian College, which has occupied the No. 1 spot for the past 12 ranking periods.

All-Time Series: Since NYU moved up from the Division II level and joined the ESCHL in 2017, the Flames hold a 6-2 advantage in the series. They split their first and last series with the Violets before and after winning all four meetings last season — the last three by 5-0 counts.

Liberty Scouting Report: Depth at all positions has allowed the Flames to emerge as frontrunners this season to contend for their fourth regular-season and tournament titles since joining the ESCHL in 2016. Even after head captain Devin Pierce ended his career mid-season and fellow forward and alternate captain Brock Thompson was sidelined by injury in the first game of last weekend's sweep of Rhode Island, Liberty showcased its offensive firepower with six players netting goals in a 6-0 win before having seven score in a 7-1 rout in the rematch.

"We believe in the depth on our team," Liberty Head Coach Kirk Handy said.

Between the pipes, after platooning freshman Cédric Le Sieur (11-1, 2.10 goals-against average, 90.7 save percentage and sophomore Tyler Myers (10-2, 2.30 GAA, 90.0 SP, two shutouts) throughout the first semester, Liberty introduced freshman Hunter Virostek (2-1, 1.67 GAA, 93.4 SP) into the rotation the past two weekends, giving him back-to-back starts against Rhode Island. The Rams only recorded 31 shots in the series, and Virostek shut them out in the opener before only allowing a third-period goal in the rematch.

New York Scouting Report: By contrast, the Violets, who have gone 1-6 (all against ESCHL opponents), since winning the first game of the series against Liberty on their home ice, only feature eight players with 10 or more points. Their attack is ignited by forwards Mac Brice (8G, 13A) and Scott Mulligan (5G, 10A) and defenseman James Long (3G, 12A). 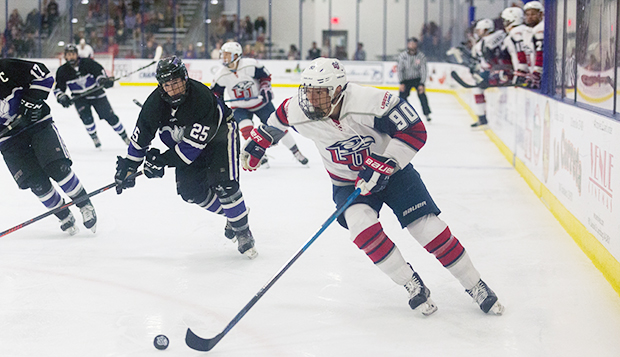 Junior forward Cole Gammer skates the puck around the corner as NYU players give chase.