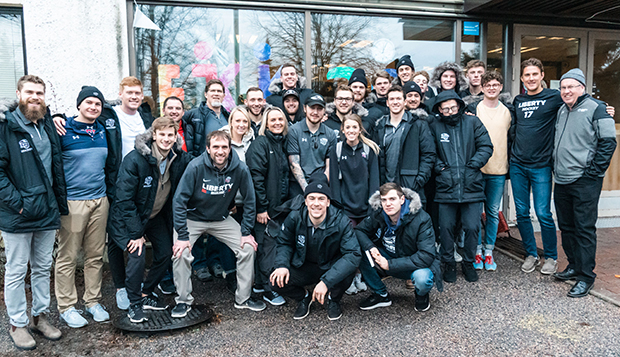 Liberty sent a team of 30 players, coaches, and support staff to Finland for the eight-day immersion. (Photos by Olivia Becker)

Establishing an ongoing ministry in Finland — working in conjunction with Operation Mobilization (OM) and the local church where OM missionary Dave Pike serves as a pastor — was an emphasis of Liberty University's ACHA Division I men's hockey team's trip to the capital city of Helsinki from Jan. 2-10.

"We just built relationships and really helped enhance the local church and the church planters there in their strategy to continue to use sports ministry as a tool," said Club Sports Assistant Director of Business Operations Reese Braband, who accompanied the team and worked with Associate Head Coach Jeff Boettger, Club Sports Global Outreach Director Brian Davidson, and LU Send in planning and facilitating the trip.

"David Pike and OM did a fantastic job in developing a full ministry schedule," Davidson added. "It was well organized and had a rhythm to it. We were doing everything we could to allow God to work through us, beyond anything we could imagine. We were being poured out as a drink offering and that's what we wanted to do on that trip."

Braband said the Flames' 22 team members adapted quickly to the culture change and embraced the mission of the trip with open hands and servant's hearts.

"The athletes were incredible," he said. "The first night we got there, they hadn't slept for about 36 hours and the guys went to a youth group that night at a church and just jumped in and shared the Gospel and prayed with the kids and just played with them and built relationships."

"We saw specific moments where we really saw God, by His Spirit, at work in peoples' lives," Boettger added.

It was the fifth cultural exchange the Flames' Division I men's hockey team has ventured on, following a Christmas break trip to Sweden in 2007 and spring break journeys to Southern Russia in 2009, Latvia in 2013, and East Asia in 2016.

"The direction we want to go as a Club Sports department with our teams is just to be really strategic," Boettger said. "We're there to serve. It's not just about us playing our sport, but it's as important to know that we can play our sport and be a witness to people in the sport, to players, coaches, fans. It's vital to be something that's strategic and long-term. It's all in progress and it's part of the long-term vision for holistic development in Club Sports, an action plan, so we're excited about it."

Future Club Sports outreach opportunities include the men's indoor and beach volleyball teams' trip to Sweden in May, also organized by LU Send, but in conjunction with the International Sports Federation (ISF) through a local pastor who helps run a beach volleyball center.

"This was a foundational trip, not only with the hockey team, but with the ministry leadership team there," he said.  "I'm excited to see what it leads to.  We would love to have others go and take that mantle on, whether it's the women's hockey team or men's Division II team or our team following up in three or four years. It'd be amazing to create a sustained effort in reaching out over there.

"We made some great connections, God connections," he added. "He's opened some doors that are unique and wouldn't be opened otherwise."

One of those connections was with a former Finnish professional hockey player, Miko Malkanaki, who played at the highest level for five years before having his career cut short by injury.

"He has only been saved for about a year and he shared his testimony with our players," Boettger said. "It was really super cool to affirm him, to let him know we are going to be praying for him. He's a follower of Christ who now a has new vision for what it means to be in hockey ministry and may be more open to getting involved in some of these strategic outreaches that OM does."

Liberty's players had an action-packed itinerary highlighted by an exhibition game against a HPK U-18 team in Hämeenlinna, where Pike is planting a new church. They also helped to conduct hockey clinics and lead activities during Kids' Action Nights at the local church. Many gave their testimonies and Gospel presentations at area churches and schools, with two having the privilege of praying with youth for salvation.

Senior defensemen Jacob Fricks and Garrett Nelson shared very different stories of how God has transformed their lives, but both were relatable to the youth they ministered to. Nelson's testimony of how God helped him overcome suicidal thoughts during his teenage years spoke directly to an eighth-grade girl named Lydia.

"I was able to talk with her throughout the week and eventually, on Friday, (Club Sports Assistant Athletic Director for Sports Medicine) Angie (Witt) and I were able to help lead her to Christ and she accepted Jesus as her Lord and Savior," Nelson said. "It was an incredible experience and awesome to see how God uses His work to glorify Himself through us. It's cool to see how God uses an opportunity to share His witness as an opportunity for us to grow in our own faith."

"Garrett said he has a new fire in him for sharing the Gospel," Fricks added.

Senior forward Cody Clarke shared his testimony and led a Finnish boy to the Lord on the previous evening, when more than 100 youth showed up to the week's final Kids' Action Night.

"For a lot of them, it was the first time they may have heard the Gospel," Fricks said.

In all, the Flames handed out 100 New Testament Bibles and shared testimonies and communicated the Gospel message to more than 1,200 kids in one way or another, Davidson said.

"We probably won't know until we get to heaven fully what our Kingdom impact was, but God used us in a mighty way," Davidson said. "The spirit was strong in working in a lot of lives, including our own."

Braband said the trip revitalized everyone on the team in their spiritual walks, even as they prepared to finish the season on a mission to defend their ESCHL regular-season title and advance to the ACHA DI National Championships, set for March 19-24 in Frisco, Texas.

"It's incredible what God can do with a trip like that, even to give some conviction for myself to realize, I don't have to go to Finland to share the Gospel," Braband said. "I can do that here, in our backyard."

"Being there was an eye-opener for what we take for granted every day in this bubble that we're in," Nelson added. "Outside of it, it's a dark world out there."