Seven Flames score in another physical clash with Rams 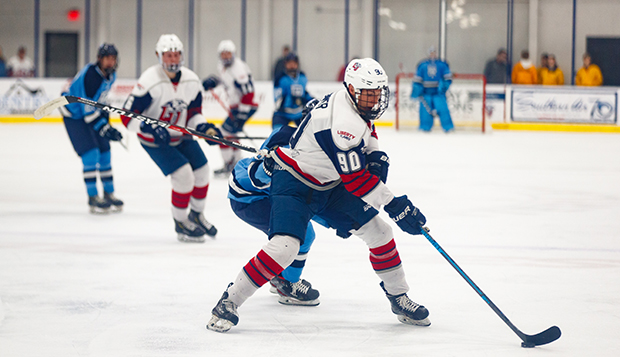 Liberty University's ACHA Division I men's hockey team got goals from seven different players in a 7-1 rout of Rhode Island, Friday night at the LaHaye Ice Center. The Flames completed a decisive sweep of the ESCHL rival Rams after six players had scored in Friday's 6-0 series-opening shutout.

Junior forward Cole Gammer scored one goal and distributed two assists, setting up his younger brother Brett Gammer's first goal since joining the Flames as a freshman this semester. Their father, Scott Gammer, watching from the stands, saved the puck for him after being hit in the foot with it after the ensuing faceoff.

In a physically pounding series, both teams were left shorthanded from the start as Liberty was playing without senior defenseman Chaydan Lauber and senior forward Brock Thompson, sidelined by knee injuries sustained in practice and Friday night's game, respectively. Additionally, Liberty Head Coach Kirk Handy checked in on senior forwards Victor Blomberg and Ryan Cox who were being treated in the athletic training room after the game.

"Vic and Cox and those guys are warriors," Handy said. "They battle through lots of injuries and play hard for us every night."

The Rams, coping without leading scorer and captain Jake Salisbury who suffered a knee injury in Friday night's opener, mounted plenty of offensive pressure early in the first period before the Flames capitalized on a counterattack sparked by the forward line of senior Andy Clarke and juniors Cole Gammer and Jordan Bochinski.

Liberty cycled the puck before Clarke received Gammer's pass from behind the cage as he skated across the slot and finished with a top-shelf wrist shot past Rhode Island goalie John Ketzenberger. Clarke's 10th goal of the season lifted the Flames to a 1-0 advantage at the 12:00 mark of the first period.

Less than two minutes later, Brett Gammer slammed home the rebound of sophomore forward Matt Bartel's backhanded shot in the right crease to double Liberty's lead to 2-0 with 10:11 left in the first.

"Brett's really come on for us, Handy said. "He's going to work hard every night and play the type of game we need played going down the stretch here. Brett and Bartel and (graduate forward Zechariah) Roberts tonight played well for us."

Bochinski forced a turnover, picked up by Bartel, received a quick outlet pass and delivered a shorthanded score by threading the puck through the five-hole of Ketzenberger on a breakaway with 14:16 to go in the second period.

Then, with the Flames on the power play, senior forward Quinn Ryan and freshman forward Colin Baird worked the puck around the perimeter to senior forward Garrett Nelson in the high slot where he unleashed a guided missile that sophomore forward Josh Fricks tipped past Ketzenberger. Rhode Island argued that he was interfered by Blomberg, but after a review, the goal stood to give the Flames a 3-0 advantage at the 11:00 mark.

Just seven seconds into another five-on-four opportunity, Liberty extended its lead to 5-0 when Nelson set up Baird for a shot from the top of the left circle that Blomberg, screening Ketzenberger in the left crease, tipped in with 9:22 to play in the period.

"That was a great play, a beautiful play by Colin Baird," Handy said.

Then, in the final five seconds of another power play with 5:53 left in the second, Nelson eclipsed the 100-point mark for his career with his third consecutive assist. He fed senior defenseman Jacob Fricks at the top of the left circle, where he spotted Cole Gammer with a pass through the slot into the right circle for a one-timed top-shelf finish and a commanding 6-0 advantage.

"Garrett's had a good career for us and this has been his strongest year," Handy said.

After Billy McNally's backhanded shot into the top-left corner with 15:12 remaining in regulation ended Virostek's bid for a second straight shutout, senior forward Josh Hamilton set up sophomore forward Arturas Laukaitis on a two-on-one break with 10:42 to go. He played a shot off the pad of Ketzenberger, who kicked the puck right to Laukaitis as he sliced into the left crease for an open finish and a 7-1 final score.

"The scoring was spread out nicely for us tonight," Handy said. "The biggest thing is we get out of the weekend semi-healthy so we're going to have to be ready to go this week, for sure. We've got NYU coming in and it's a big conference weekend for us."

Besides Stony Brook, the Violets are the only other ESCHL team to take a game from the Flames this season, Nov. 15 at NYU. 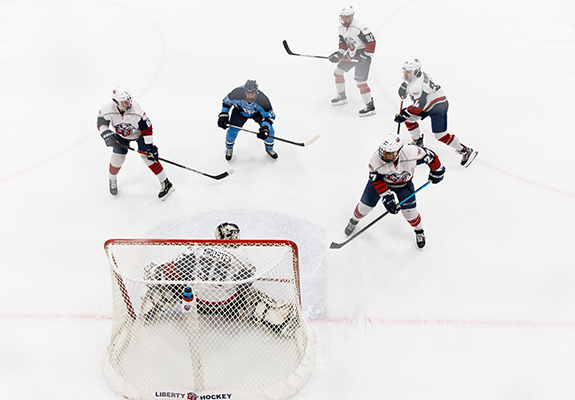 Freshman goalie Hunter Virostek made 17 saves and just missed his second shutout of the series.