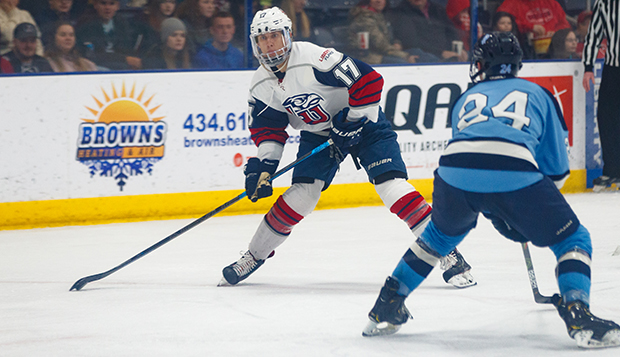 It took just 27 seconds for Liberty University's second-ranked ACHA Division I men's hockey team to start the scoring and open the floodgates— for a flurry of goals and Teddy Bears — in Friday night's opener against ESCHL rival Rhode Island, a 6-0 triumph at the LaHaye Ice Center.

The Flames (22-4, 13-2 ESCHL) had six different scorers and held a commanding 33-14 shot advantage on the Rams (14-13-1, 5-10 ESCHL), with freshman goalie Hunter Virostek posting his first shutout since transferring this spring.

"Hunter played well tonight," Liberty Head Coach Kirk Handy said. "He made some key saves, especially when it was 1-0. We played a smart, physical game tonight. I was proud of our guys. It was a chippy game and our guys maintained their composure overall."

Senior defenseman Garrett Nelson sprung the Flames' attack from deep in his own zone, sending a pass up the middle of the ice to senior forward Quinn Ryan, who fed the puck to sophomore forward Arturas Laukaitis at the top of the left circle. He skated into the circle before firing a sharp-angled shot past a Rams defenseman and goalie John Ketzenberger inside the right post, unleashing a barrage of stuffed animals from the stands onto the ice in support of Gleaning For The World's Teddy Bear Brigade.

"We normally come out with the first shift always buzzing when it's a game like this where everyone wants to score the first goal to get those Teddy Bears out there," sophomore forward Josh Fricks said. "We were hoping to wait a maybe a few more minutes, just to get more of the crowd in here, but it seems to always happen the first shift, so that's not a bad thing."

Just over a minute after senior forward Brock Thompson went down in the corner with a lower-body injury, the Flames padded their lead to 2-0 when freshman defenseman Colin Baird received a cross-ice assist from Nelson at the top of the left circle and caromed his shot off the left post into the right side of the net at the 5:39 mark.

Liberty extended its edge to 3-0 with 2:57 left in the first period when Fricks skated the puck through the high slot deep into the left circle, where he managed to release a short backhanded pass between two Rams to Laukaitis in the left crease. He left it for Ryan in front who took a check from defenseman Jacob Durocher while slipping the puck under Ketzenberger.

Exactly five minutes into the second period, Andy Clarke started a fast break in the defensive end and finished it in the right crease. He sent a pass up to fellow senior forward Jordan Bochinski who skated along the right boards before crossing it to junior forward Cole Gammer, who was crashing through the left crease. The puck bounced off Gammer right to Clarke for a one-timed finish and a 4-0 advantage.

Fricks made it 5-0 at the 10:15 mark after Ryan won a faceoff in the left circle. Senior defenseman Josh Bergen sent a pass down to Laukaitis in the right circle and he redirected a touch pass to Fricks in the slot, where he rung up a wrist shot into the top right corner.

"It was a faceoff play, a new one we've been working on," Fricks said. "It was the first time we've done it in a game and it worked pretty well. It couldn't have been a better pass by Laukaitis, right where I wanted it."

The Flames killed off two Rams power plays in the first period and two more in the third, preserving the shutout for Virostek.

"Our PK was excellent tonight," Handy said. "Our guys played well and (Assistant Coach) Jonathan Chung has got them rolling. Vic (Blomberg) and Andy (Clarke) are big parts of the PK for us, along with (defensemen Basil) Reynolds and Jacob (Fricks) and Colin (Baird) on the back end."

Ryan and Baird assisted Gammer on a power-play goal in the final 15 seconds, with Gammer deflecting Baird's shot from the left circle past Ketzenberger right in front.

Liberty will be without Thompson and senior defenseman Chaydan Lauber, who was injured in practice this week, when it meets Rhode Island for Saturday's 7 p.m. back at the LaHaye Ice Center.

"Those are two big parts of our team, but we've had a lot of other guys step up and play," Handy said. "Cody (Clarke) went back on defense and that's the way our guys have been, with a next-man-up mentality."

The Flames will seek to complete a four-game season sweep and improve on their 15-0-1 record against the Rams.

"We've got to play better and execute better (Saturday)," Handy said. "We need a good start again tomorrow night. That will be a big, big key for us." 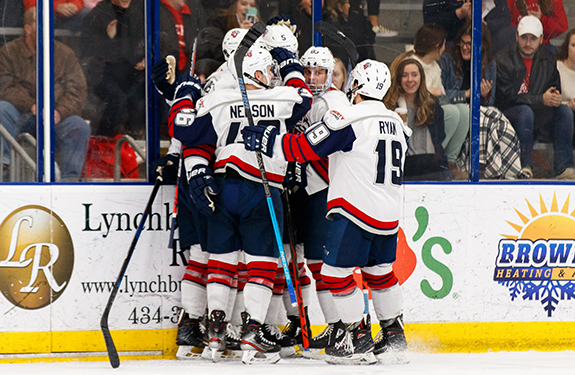