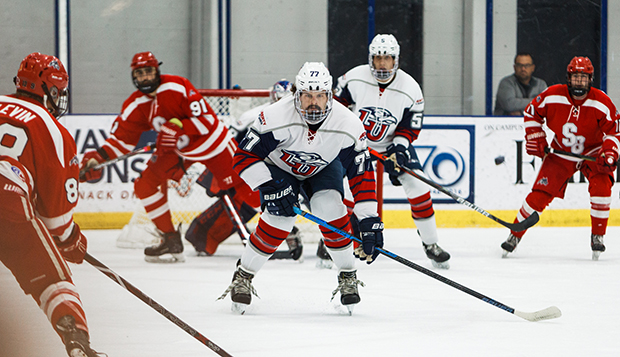 The second-ranked Flames (21-4, 12-2 ESCHL) split the series with the Seawolves (15-8, 7-5 ESCHL) and won three out of four meetings on the season, gaining separation in the race for their third consecutive regular-season conference title and ACHA DI National Championships autobid.

"It's a tight conference race between us and Stony Brook and I'm sure we'll play them again," Liberty Head Coach Kirk Handy said of either the ESCHL or ACHA tournaments. "I thought we played a more complete game tonight and our penalty kill, though it allowed one goal, killed off a five-minute major in the second and really rebounded from last night."

The Seawolves picked up where they left off in Saturday night's opener by converting a power-play goal to start the scoring with 10:51 left in the first period when Brendan Pepe rifled a wrist shot from the high slot into the top-left corner of the cage past Flames freshman goalie Cédric Le Sieur.

But after only going three-for-six on the PK in Saturday night's 4-3 setback, the Flames finished four-for-five in Sunday's rematch.

Less than a minute later, senior defenseman Garrett Nelson put a puck on net from the point and Ryan gathered the rebound before senior forward Brock Thompson punched it in to knot the contest at 1-1 at the 10:19 mark.

"I was proud of the way our guys started the game and really liked the compete they showed tonight," Handy said. "They got a power-play goal and our guys stuck with it. They kept their legs going and their speed up and battled back."

Liberty seized a 2-1 lead just four seconds into a power play when Bochinski tipped in a shot from the top of the right circle off the stick of senior forward Jacob Fricks with 3:13 left in the first. Then, 26 seconds later, after a steal and near score by senior forward Ryan Cox, Nelson extended the edge to 3-1 by launching a shot from the right side of the blue line that sailed through a screen set by Roberts past Stony Brook goalie Richard Shipman into the upper netting.

"(Bochinski) had a strong game and we threw Brock (Thompson) in with Quinn (Ryan) and Art (Laukaitis) and that line played well for us tonight," Handy said, noting that freshman forward Brett Gammer also contributed two assists by setting up Fricks and Nelson after winning faceoffs.

Less than two minutes into the second period, Bochinski received an outlet pass up the center of the ice and stole the puck back from Pepe before going in and burying a one-on-one opportunity with Shipman into the top-left corner of the cage, for a commanding 4-1 advantage.

Ryan stretched the gap to 5-1 with 9:05 left in the second after senior defenseman Basil Reynolds released a shot from the high slot that was tipped over the net to Thompson, whose assist from beyond the end line set up Ryan in the right circle for an open slap shot.

Senior defenseman Josh Bergen blasted a missile from the point that padded Liberty's lead to 6-1 with 14:09 left in the third before Ryan netted a power-play goal on a shot from inside the left circle at the 7:46 mark and Joseph Slevin capped the scoring for the Seawolves in the final 1:18.

Liberty will return to the LaHaye Ice Center next weekend for another ESCHL battle against Rhode Island on Friday and Saturday at 7 p.m.