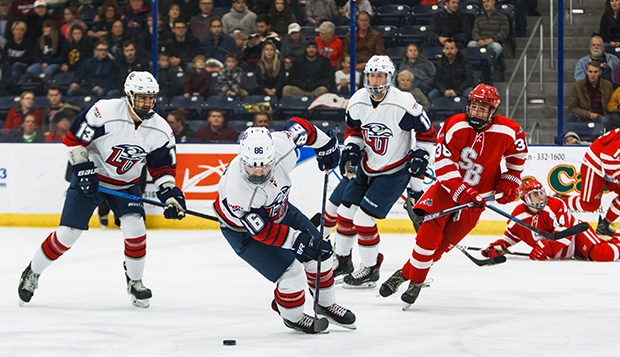 "It was a tough game," Head Coach Kirk Handy said after the Flames slipped to 20-4, 11-2 in ESCHL play. "I thought there were moments where we were where we wanted to be, but we had to kill a lot of penalties tonight. Our penalty kill has been solid of late, but tonight, they got three power play goals on us. We've got to cut down the amount of opportunities that we're giving them."

The Seawolves (15-6, 7-4 ESCHL) struck first with just over 13 minute left in the first period when defenseman Kyle Huhn capitalized for a 1-0 advantage.

"We were a little slow starting in the first period, which is another thing we could improve (on Sunday)," Handy said. "Getting the first goal is important."

Senior defenseman Chaydan Lauber netted the tying score on a power play with 10:17 left in the second period before junior forward Jordan Bochinski lifted Liberty to its only lead by finishing off a breakaway opportunity at the 6:30 mark. However, forward Dustin Rinaldo, Stony Brook's leading scorer, put away a five-on-three chance to tie it back up with the Seawolves operating in a five-on-three man advantage.

Early in the third, senior forward Quinn Ryan had his backhanded shot in the left crease denied by Keating who made an incredible save of a putback by senior forward Zechariah Roberts in the right crease moments later, preserving the 2-2 tie.

Freshman goalie Hunter Virostek saved a breakaway opportunity by Rinaldo on the Seawolves' next trip down the ice before defenseman Dominick Molfetto cashed in on a shot from the top of the right circle, lifting Stony Brook to a 3-2 lead at the 14:47 mark.

Then, in the final 15 seconds of another power-play opportunity, Ian Keller tapped a putback of a shot by Rinaldo under the pads of Virostek after a failed clearing chance by the Flames with 8:48 to play.

After a timeout, sophomore forward Arturas Laukaitis drew the Flames back to within 4-3 by launching a one-timed rocket from the top of the left circle off an assist from senior defenseman Garrett Nelson with 8:17 to go.

With 1:44 remaining in regulation, Handy pulled Virostek to give the Flames a man advantage on attack, but they could not convert the equalizer and Stony Brook clinched its eighth straight win.

"We definitely had a push at the end of the game, which was a positive, but at the end of the day, we can't give them as many opportunities as we did on the power play," Handy said, noting that Stony Brook outshot Liberty, 44-42, and Virostek made 40 saves in his first start for the Flames. "Hunter battled hard, he really did. When it comes down to it, we have to stay out of the (penalty) box."

Sunday's rematch is set for 3:30 p.m. back at The Rinx and will be webcast live on Stony Brook's YouTube channel.