Flames rally after midnight for five-game triumph over Terps 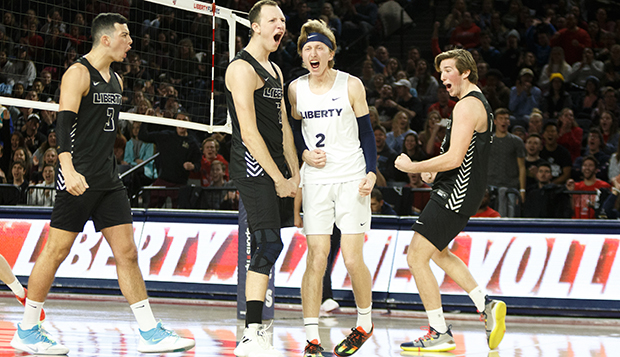 As the ball smacked the Vines Center floor signaling a 15-13 final-game victory for Liberty University's men's volleyball team, thousands of fans rose to their feet in thunderous applause, celebrating the Flames' come-from-behind 25-15, 22-25, 22-25, 25-23, 15-13 triumph over the Maryland Terrapins.

Friday night's "Midnight Mayhem" match will go down as one of the most suspenseful in the six-year history of the event, though it appeared otherwise from the outset, when Liberty came out of the gate strong and established early control. Riding the emotional momentum of playing in front of the largest crowd many of them had ever experienced, the Flames flexed their muscles in a dominating 25-15 first-game win.

"The crowd was pumped to be there," sophomore libero Tait Lapham said. "Going into it, I think a lot of the guys were nervous, especially me. It was most of our first time being under the lights and everything. But the crowd really welcomed us and we came out and smacked them in the first set."

However, the tables turned on the fired-up Liberty squad as the Terrapins showed ESPN+ viewers they wouldn't go away without a fight. The Flames lost the next two sets, both by 25-22 scores.

With the majority of the crowd still present and awake in the fourth set, Liberty turned up the heat and put the pressure on Maryland. The Flames erased a mid-set deficit and tied the game at 21 before Terrapins opposite hitter Erick Hillard went down with what appeared to be a severe left ankle injury.

After Maryland players carried their injured teammate to the bench, Terrapins Head Coach Joe Moyer reluctantly turned to Colby Fong, a libero, to fill for his injured starter. Down a man and with a surging Flames squad nipping at their heels, the Terrapins fell 25-23 in Game 4.

Flames fans stood for almost the entirety of the fifth game as they looked on with joy at what unfolded before them. Liberty appeared to have the upper hand throughout the competitive tie-breaker and eventually pulled out a 15-13 nail-biter.

"It ended up being a close game but we just persevered and fought," sophomore setter Tommy Speelman said.

Flames head coach Kaleb VanDePerre enjoyed the thrill of performing in front of a sizeable crowd as much as his players did.

"Playing the Midnight game in front of such an electric crowd is so exciting," he said.

VanDePerr and his troops will enjoy the victory on Saturday before quickly changing their mindset to prepare to play Thursday night's second game of the spring season, set for 7 p.m. at NCAA Division III power Southern Virginia University. 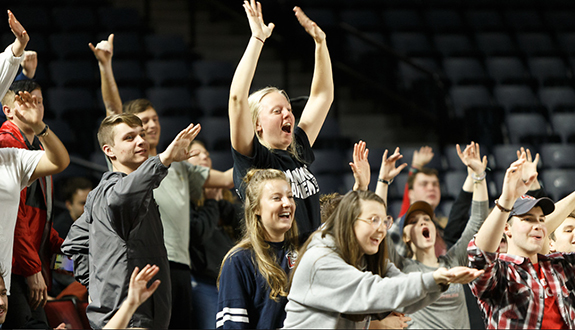 Volleyball fans flocked to the Vines Center en masse to fan the Flames in their season-opener.