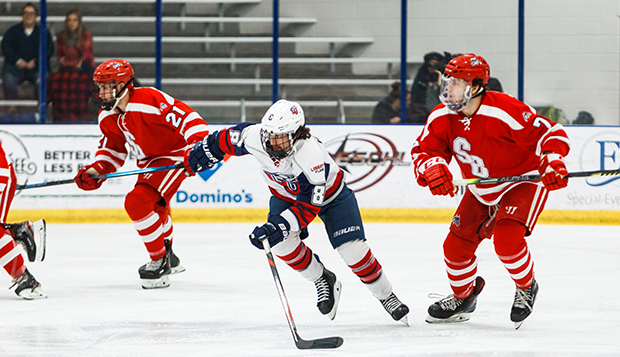 Senior forward and captain Josh Hamilton skates between Stony Brook players out of the Flames' zone in the teams' first meeting, Nov. 1 at the LaHaye Ice Center. (Photos by Gabrielle Calhoun)

A clash between two of the top teams in the nation awaits Liberty University's ACHA Division I men's hockey team this weekend when the Flames — which remained at No. 2 in this week's national rankings — travel to Long Island to challenge ESCHL rival Stony Brook. The Seawolves. fresh off Sunday's and Monday's road sweep of No. 5 Michigan-Dearborn, rose five spots to No. 6.

When Stony Brook visited the LaHaye Ice Center on Nov. 1-2, also a top-10 showdown at the time with the Flames at No. 6 and Seawolves at No. 9, Liberty swept the series by 7-3 and 2-1 scores.

"We played them earlier, but they're going to be a different team when we play them this weekend," Flames senior forward Andy Clarke said. "We have the skill; we've just got to bring it."

Liberty started the spring semester with a 5-2 and 10-3 conference sweep of Delaware last Friday and Saturday at home.

"We thought last weekend was going to be a game-changing weekend for us, but really this weekend is going to put us to the test early in the second semester," senior forward Cody Clarke said. "Stony Brook's got good defense, so we're going to have to find other ways to put the puck in the net than just on pure skill alone. We've really got to bear down. It's going to be a rough game, physicality-wise. We're just going to have to grind through it. It's a top-10 matchup, so we know what those games are like and we're going to be ready for it."

Liberty Scouting Report Senior forward Quinn Ryan, who had three assists in the first meeting with the Seawolves, leads the Flames in scoring with 14 goals and 29 assists. He is followed by junior forward Jordan Bochinski (11G, 25A), sophomore forward Arturas Laukaitis (12G, 19A), senior defenseman Garrett Nelson (6G, 19A), senior forward Brock Thompson (13G, 10A), and junior forward Cole Gammer (12G, 11A).

"We have an arsenal of guys that can score," Andy Clarke said.

Between the pipes, the Flames have platooned first-year goalies Cédric Le Sieur (10-1, 2.11 goals-against average, 90.4 save percentage) and Tyler Myers (10-2, 2.30 GAA, 90.0, two shutouts), with freshman transfer Hunter Virostek waiting in the wings for his first start.

Stony Brook Scouting Report: The Seawolves have sandwiched two seven-game winning streaks around a six-game skid that included being swept by Liberty and top-ranked Adrian in back-to-back series in November. They moved back into the top 10 after sweeping UNLV on the road to end the fall semester and jumped to No. 6 by starting 2020 with 4-3 and 3-2 (OT) wins over Michigan-Dearborn. 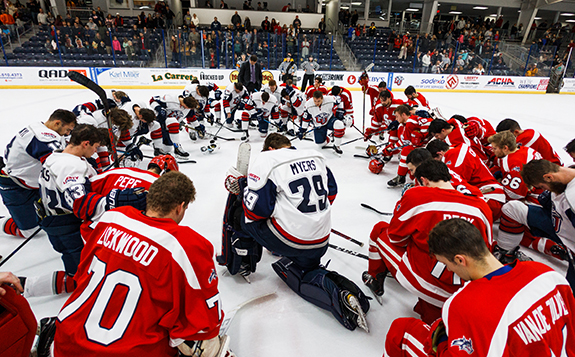 Liberty sophomore goalie Tyler Myers (29) and players from both teams pray after the Nov. 1 game.