Flames fired up for Midnight Mayhem match against Maryland 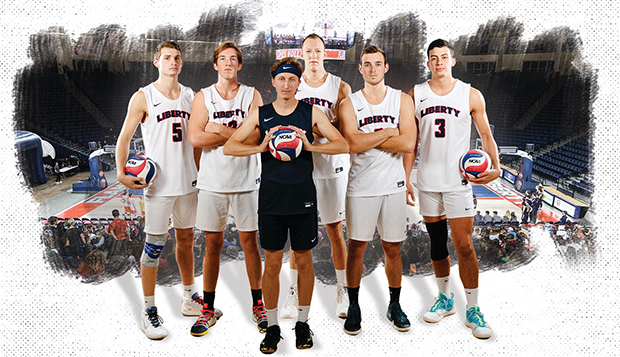 Midnight Mayhem returns to the Vines Center for the sixth time this Friday at 11:59 p.m. when Liberty University's men's volleyball team tips off its 2020 season by hosting Maryland in a match to be webcast live on ESPN+. Advance tickets for the late-night-approved event, which will help support for the team's mission trip to Sweden in May, are $3 for general admission or $1 for students.

"This match is still unique in the support we get from the school and student body and I'm excited that we're able to offer it," said Flames first-year Head Coach Kaleb VanDePerre, who has been instrumental in promoting the event in recent seasons as Club Sports' assistant director of marketing and promotions. "It is huge in recruiting and awesome for our guys to be able to play in front of a big crowd, in a big moment. It gets us ready for nationals and we're excited for it every year."

Both teams are East Coast Volleyball Association members with the Flames competing in the South Division and the Terrapins in the North. Liberty rallied from behind to defeat Maryland in pool play, 22-25, 25-16, 15-12, en route to its first East Coast Volleyball Tournament championship last spring at College Park, Md.

This year's Flames lineup features plenty of new faces and an entirely new coaching staff led by VanDePerre and Assistant Coach Maddy Anema. They spent much of the fall semester evaluating the team's talent and determining the 10-man rosters for the Division I and II squads. The DI team debuted by going 6-0 against mostly NCAA DII and DIII competition on Nov. 9 at George Mason University.

"Basically the same guys who went to GMU will be playing this weekend in the same starting roles, with a few minor exceptions," said VanDePerre, who was pleased with the team's first week of practice after the month-long Christmas break. "Last week was good. The guys came back in pretty good shape and really got after it in the gym. We did a lot of culture building and team building in the last semester and guys have been super excited to get back to work."

Knapp, who is 6-feet, 8-inches tall, and 6-4 sophomore Tommy Speelman rotate at setter, assisting the front-line players' kills, and sophomore Tait Latham is the Flames' libero on the back row.

"We have a committee of hitters and are confident anyone on the court can be a go-to guy," VanDePerre said. "Everybody's pretty much bought into the mission and our vision of competing at our highest, as Champions for Christ, and pursuing the best that we can be."

He and Anema have taken a holistic approach to equipping the Flames for their spring season opener, to be played in an electric atmosphere.

"There's a lot of physical, emotional, and spiritual preparation that goes into it," VanDePerre said, noting that in a sport known for momentum swings, sways in emotion and fatigue will also be factors. "We put a lot of different pieces and parts together in the fall and put a lot of stress on them by playing some good teams. Especially for the guys who haven't experienced it before, we tried to prepare them for the adversity and let them learn how to be mentally tough."

"It'll be fun," VanDePerre said. "Anytime we can battle brings us closer. It is good to see different teams from different regions, to compete at a high level and develop that relationship with them. It helps the league (National Collegiate Volleyball Federation) as well to see where teams rank."

Liberty rose as high as a program-record No. 2 ranking in the NCVF DI poll and No. 5 at the DII level last season. This season's first rankings will be posted on Feb. 12.

The Flames will try to qualify both teams for this season's NCVF National Championships, set for April 9-11 in Kansas City. They can clinch bids back to the March 28-29 East Coast Championships at Maryland by placing in the top two of their respective divisions at the Feb. 8 ECVA South Play Date that Liberty will host in the LaHaye Multipurpose Center.