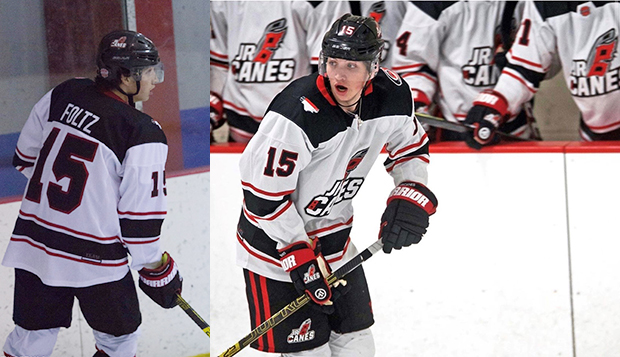 Jason Foltz is a skilled forward who has played in recent seasons with the USPHL's Atlanta Junior Knights and Carolina Junior Hurricanes.

Jason Foltz, who has netted 20 goals and distributed 19 assists this season for the Carolina Junior Hurricanes, which competes in the Southeast Division of the United States Premiere Hockey League (USPHL), will join fellow Hurricanes forward recruit Bryce Pierce on Liberty University's ACHA Division I men's hockey team next fall.

"Last year, I was more of a playmaker and this year I'm more of a goal-scorer, finishing the chances I get with a shoot-first mentality," Foltz said. "I like to put pucks in the net and definitely like to use my speed."

That is one of the factors that piqued the interest of Flames Head Coach Kirk Handy and the members of his coaching staff who recruited him — Associate Head Coach Jeff Boettger at a December showcase in Florida and Ben Hughes at a Jan. 4-6 series in Boston.

Foltz, 20, visited campus with Pierce from Oct. 18-19 to see the Flames sweep Syracuse at the LaHaye Ice Center.

"I fell in love with the campus and the culture that the hockey team has and knew it was something that I'd like to be a part of," he said.

Foltz stopped by Liberty on the way back from Pennsylvania on Monday and toured campus with Handy before committing.

"I could play one more year of Junior hockey, but I decided I'm ready for college, ready to get after it," he said. "Liberty has everything I could ask for. It is the best of both worlds — I'll be playing really good hockey and getting a really good education."

Foltz said the enthusiasm of Liberty's student body and Club Sports department were deciding factors in his college choice.

"You're going to be playing in front of a hyped-up crowd every night, very supportive fans," he said. "I love it."

He is the Flames' fourth fall commitment after landing two transfers for the spring semester. Liberty's recruiting is critical for the program's continued success as the team will graduate 13 seniors this spring.

"Kirk (Handy) told me they're not rebuilding, they're reloading and I'm excited to be a part of it, to bring it every night and be a game-changer," Foltz said.

As much as he is looking forward to refining his game and — like Pierce and his older brother Devin Pierce — pursuing a degree in exercise science in preparation for a career in physical therapy, Foltz is eager to grow spiritually during his time at Liberty.

"When I got there and saw the guys praying at center ice it really hit home for me," Foltz said. "God's got a plan for me and I'm going to follow His path."

He is also following in the footsteps of his father who runs his own physical therapy practice with two locations in his home state of Georgia.

"After college, I am looking to work with him for a couple of years and hopefully take over the business and go from there, maybe also doing some athletic training for local high schools and colleges," Foltz said.

He would not rule out a professional hockey career before going into medicine.

"If the right opportunity comes for me to play after college that I can't pass up, I'd take it," Foltz said. "I love the sport and it's something that's been a big part of my life."

His coach with both the Junior Knights and Junior Hurricanes, Kevin St. Jacques, was drafted by the NHL's Chicago Blackhawks and played minor league hockey with Boettger. He and Bryce Pierce are looking forward to concluding their Junior careers by winning a USPHL Dineen Cup.

"Bryce and I are really good friends and I love to play along with him," Foltz said. "We have a very talented team and we're going to be able to come out of here with a championship. We've got the team to do it and all of the tools we need."