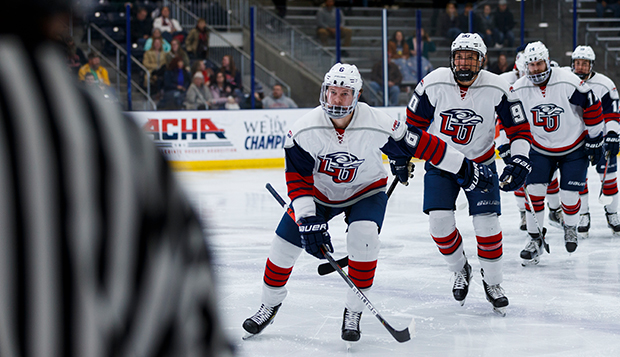 A three-goal flurry late in the third period iced the 12th consecutive victory for Liberty (20-3, 11-1 ESCHL) in their series with the No. 23-ranked Blue Hens (15-10, 4-6), further distancing itself in the conference standings and strengthening its No. 2 national ranking.

In a game that featured no power-play goals, the Flames outshot Delaware, 38-29

"We scored early goals and then had to weather the storm," Liberty Head Coach Kirk Handy said. "They were putting the pressure on us in our own end and we were able to come back and score those three quick goals late."

Just 1:17 after the opening faceoff, senior defenseman Garrett Nelson sparked the attack, clearing the puck out of his own slot and working a give-and-go with junior forward Jordan Bochinski up the right wing before chipping it in from point-blank range out in front.

Senior forward Quinn Ryan set up sophomore forward Josh Fricks' 20th goal of the season at the 10:39 mark. Stationed on the right end line, Ryan received a pass from sophomore forward Arturas Laukaitis and lifted a pass into Fricks cutting through the right crease, where he batted the puck inside the right post as he dove across the box for a 2-0 lead.

Sophomore goalie Tyler Myers stopped a breakaway opportunity by Delaware forward Brian Ostranger at the 6:30 mark before junior forward Cole Gammer capitalized on the other end 10 seconds later. Senior defenseman Chaydan Lauber and Bochinski sent clearing passes up the right wing to Gammer, who skated onto the puck and sliced through the slot before beating Blue Hens' goalie Christopher Ponticello with a backhand, extending Liberty's advantage to 3-0.

Delaware got on the scoreboard at the 4:08 mark when Harrison Good launched a shot from the right point through a screen that shielded Myers in front.

The Flames struck quickly to start the second-period scoring on a spectacular finish by Gammer just 1:08 after the opening faceoff. He received a quick outlet pass from freshman transfer and younger brother Brett Gammer and skated up the right side before cutting back between three Delaware defensemen and wrapping the puck around Ponticello for a 4-1 lead.

Then, at the 16:18 mark, Bochinski took a pass across the slot from Cole Gammer and fired an incredible wrist shot while falling down, watching it careen inside the left post for a 5-1 advantage.

The Blue Hens trimmed the deficit to 5-2 in the final seconds of a power play on another perimeter shot by Chris Mazzella deflected past Myers by fellow forward and leading scorer Michael Nisky.

Liberty's fourth line, made up of three seniors, manufactured a phenomenal goal that padded the Flames' lead to 6-2 with 9:50 left in the second period when alternate captain Josh Hamilton cleared the puck up the right wing to Ryan Cox, who flipped a crossing pass to Victor Blomberg in the left circle. He deftly tapped it back to Hamilton skating down the slot for a point-blank finish.

Nisky capitalized on a missed tripping penalty against Ryan that led to a turnover in Delaware's end, taking an outlet pass that sprung him for a one-on-one breakaway that cut the deficit to 6-3 just 3:39 before the second intermission.

"In the second period, we weren't as sharp as we wanted to be and we had to battle some adversity there," Handy said, noting that freshman defenseman Dmytro Kobylyanskyi was forced out of the contest by injury. "It's almost like next-man-up mentality when guys are down. Our team's got a lot of strength this year in depth at all positions."

The Flames needed just 32 seconds to stretch their edge back to four goals at the start of the third period when senior forward Andy Clarke stole the puck in the high slot and stuck it in from right in front of the cage with help from Cole Gammer.

Freshman forward Colin Baird had a goal disallowed by a high sticking call moments later before the Flames finally cashed in with three goals in a span of a minute and a half down the stretch, showcasing the explosiveness of their attack.

First, the Fricks brothers set up Laukaitis at the top of the left circle, where he skated toward the net and deked a defender before finishing from close range for an 8-3 advantage at the 3:47 mark.

Exactly 45 seconds later, the Flames' fourth line used textbook execution to produce another goal sprung by a fast-break feed from Blomberg to Hamilton. He dished the puck to Cox in the right circle, where he tucked a backhanded feed back to Blomberg for a high-percentage shot in the slot.

"We know each other and like to play with each other," Blomberg said of his line that worked together last season before reuniting this weekend. "Every guy in that locker room is playing a key role. We're just buying into our roles and doing everything for the team right now."

Senior forward Brock Thompson put an exclamation point on the seven-goal victory with 2:39 remaining in regulation, receiving a fast-break pass from Jacob Fricks and skating through the right circle and into the crease for a power finish.

"Overall, we played well," Handy said. "It was a step forward for us. I'm excited to see us continue to move forward and go on to Stony Brook next weekend."

"It's always a battle when we go there but it's going to be fun," Blomberg added. "We're looking forward to it." 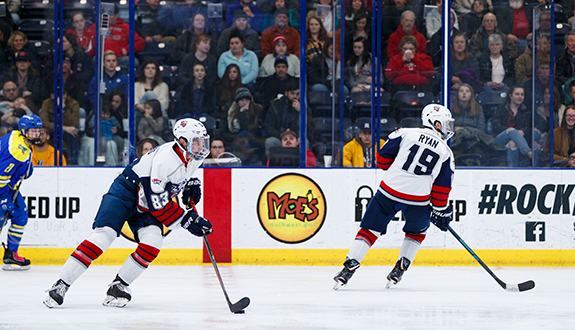 Sophomore Josh Fricks works the puck up from the red line behind senior linemate Quinn Ryan.