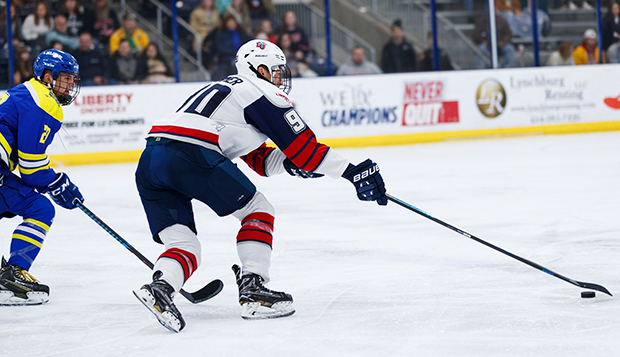 In their first ACHA action in nearly six weeks — not counting an exhibition game against a U18 team in Finland during a mission trip over Christmas break — the Flames (19-3, 10-1 ESCHL, ranked second in the ACHA) pulled away with four unanswered goals in the second and third periods of a 5-2 triumph.

"I like how our guys responded in the third period and the resiliency we had in the locker room, for sure," Liberty Head Coach Kirk Handy said. "We came out a little flat. It was our first game back from the break and maybe our guys weren't as sharp as they needed to be. We didn't have our A game, but as the game went on, our game got stronger."

The Flames struck as fast as lightning in the first period. Just 47 seconds after the opening faceoff, senior defenseman Jacob Fricks received junior forward Cole Gammer's pass from along the back boards and one-timed a shot past Delaware goalie Christopher Ponticello.

But the Blue Hens (15-9, 4-5 ESCHL) came right back, netting the tying goal on a quick counterattack at the 14:57 mark when defenseman Jakob Defares crashed the cage and threaded the rebound of forward Jake Nimeh's sliding shot past Flames freshman goalie Cédric Le Sieur.

Delaware seized a 2-1 lead with 5:31 left in the first period after a third rebound bounced out to forward Gregory Jandoli at the top of the left circle, where he launched a wrist shot through traffic into the back of the net.

"I give them credit," Handy said. "They played hard tonight and really set us back on our heels at the beginning of the game."

Seconds after drawing a roughing penalty that put the Flames on the power play, senior forward Brock Thompson was credited with the equalizer with 8:31 left in the second period. Senior forward Quinn Ryan controlled the rebound of a shot from the point by sophomore forward Josh Fricks and fed a short pass to Thompson, who slid the puck off the skate of a Blue Hens defenseman and under the pads of a sprawling Ponticello.

Just 1:02 before the second intermission, the Flames converted an unusual fast-break opportunity into the go-ahead goal. Senior forward Andy Clarke skated from behind his own cage all the way up the left wing, drawing Ponticello out of the Blue Hens' net before sending a crossing pass to junior forward Jordan Bochinski, who tucked the puck into an open net for a 3-2 advantage.

Le Sieur made a few critical saves in the second period, when Liberty shut out the Blue Hens, and denied forward Michael Nisky, Delaware's leading scorer, on a breakaway opportunity early in the third.

"Cedric made some real big saves for us, some real timely saves," Handy said. "It was a night when our PK got the job done. We killed off some big penalties tonight and we got a power play goal."

Moments later, the Flames capitalized on the other end when sophomore forward Matt Bartel punched in the puck from point-blank range — after freshman forward transfer Brett Gammer corralled the rebound of senior defenseman Basil Reynolds' shot from the point out in front — for a 4-2 lead with 13:56 remaining in regulation. Cole Gammer stretched Liberty's edge to 5-2 with an unassisted score at the 12:50 mark after chipping the puck out from along the boards deep in his own end. He immediately skated down the ice and intercepted it in the right circle before maneuvering around Ponticello for the final score.

The Flames, who held a 37-25 shot advantage in Friday's opener, will look to extend their winning streak against the Blue Hens to 12 games in Saturday's rematch, set for 7 p.m. back at LaHaye.

"We're going to have to get back at it (Saturday) and build off the momentum that we sustained at the end of (Friday's) game," Handy said. "Those guys are going to come at us and we have to play every game well and be consistent in our play and that's going to be a big thing for us for the rest of the season." 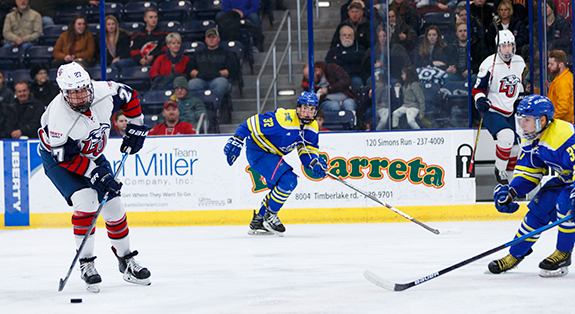