Flames return to action in home series against Delaware 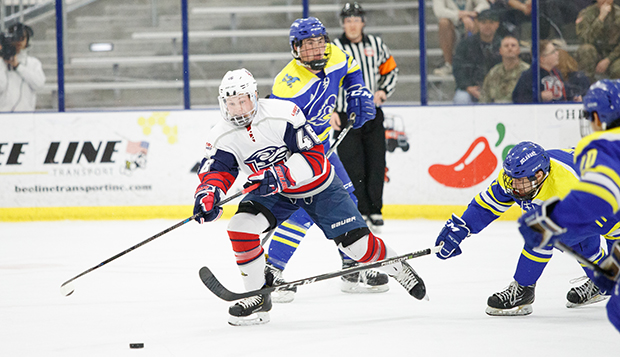 Though Liberty University's ACHA Division I men's hockey team only played one game on its LU Send trip to Finland over Christmas break, a 6-3 victory over a U-18 team in Hämeenlinna, the Flames stayed mentally, physically, and spiritually sharp for this weekend's ESCHL series against Delaware.

"It was good for us as a hockey team, to go on a trip and spend some time together, before coming back to school," Flames senior defenseman Jacob Fricks said. "We had a chance to skate every day while we were there and kind of build the community that we had before we left and continue it into the season."

Liberty remained at the No. 2 spot in this week's ACHA DI national rankings behind only the undefeated Adrian College (16-0), which dealt the Flames two of their three losses in the fall semester.

This weekend's doubleheader against Delaware is the first of five series the Flames will host this semester, including a rematch with the top-ranked Bulldogs on Feb. 21-22. For now, Liberty is fully focused on extending its 10-game winning streak against the Blue Hens.

"We just have to come out and play hard and play our game," Fricks said.

The Flames can clinch a third consecutive autobid to the ACHA DI National Championships, set for March 19-24 at the Comerica Center in Frisco, Texas, by maintaining their first-place standing through ESCHL regular season play, capped by a Feb. 14-15 rematch with the Blue Hens in Newark, Del.

In goal, freshman Cédric Le Sieur (9-1, 2.13 goals-against average, 90.3 save percentage) and sophomore Tyler Myers (9-2, 2.24 GAA, 90.1 SP, 2 shutouts), who platooned throughout the fall, will be complemented by freshman transfer Hunter Virostek this spring.

Delaware scouting report: The Blue Hens have an even dozen players who have totaled 10 points or more, paced by forwards Michael Nisky (7G, 29A), Chris Mazzella (16G, 17A), and Colin Emerich (11G, 20A) and defenseman Jakob Defares (7G, 13A).

Christopher Ponticello is Delaware's only active goalie that played in the fall semester, logging over 1,200 minutes and posting a 13-7 mark with a 3.24 GAA and 91.4 SP.

Coaches: Kirk Handy is in his 20th season as Liberty's head coach and has compiled an overall record of 450-183-29. Todd Mittlemeier was promoted from assistant to become Delaware's head coach last January and has posted a 27-20-1 record after the equivalent of his first full season.