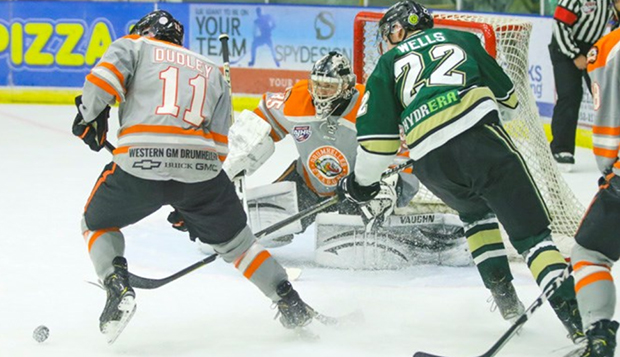 Hunter Virostek held opponents under 3.00 goals per game and maintained a save percentage above 90 during three seasons with the Drumheller (Alberta) Dragons.

With as many injuries as it dealt with this fall, depth on the forward lines and in the defensive corps has been critical for Liberty University's ACHA Division I men's hockey team, which enters the spring semester at 18-3 and ranked a program-best No. 2 in the nation.

When the Flames return from their mission trip to Finland and resume ESCHL action with a series against Delaware on Jan. 17-18, they will have a third option in goal with freshman Hunter Virostek transferring in from Albertus Magnus College, an NCAA Division III program in New Haven, Conn.

"Competition is something you want to have up and down your lineup due to the length of the season," Liberty Head Coach Kirk Handy said. "We've had it with 15 forwards and seven defensemen and now we've got three guys that are going to battle for the starting position in goal."

"We like our goaltending and the opportunity to get Hunter adds depth," Handy said. "In the past, we have had three goalies and always feel better if we have the right three guys. With Tyler and Cédric, adding Hunter is great for our goaltending, not only for this year but for the future."

Prior to starting his collegiate career this past fall, Virostek played for the Drumheller Dragons of the Alberta Junior Hockey League (AJHL) from 2016-19, leading the team to the playoffs all three seasons with goal-against averages around 3.00 and save percentages around 90.0.

"He is a solid goalie who is going to come in here and work hard," Handy said of Virostek, who stands 6-feet, 1-inch tall and weighs 185 pounds. "He's a guy who has had a very successful junior hockey career and will be able to bring that energy, someone who can come in here and be able to push the group."

Virostek plans to pursue a professional hockey career after graduating with a degree in business management.

"I am definitely excited to be on a team that's a competitor," he said. "I am looking forward to the next level. It's all about earning your spot. I think it will be a good transition. I'll be able to bring in some energy and a competitive edge every day."

Virostek, 21, started playing hockey at the age of 4 and switched to goaltending when he was 12.

"When I was a kid, I was fairly small and played Pee Wee because of my size," he said. "I had speed and good hand-eye coordination so I was able to play the goalie position more effectively. Now my size has helped, especially playing in leagues that have been pretty physical. I know there is definitely going to be contact at the collegiate level."

Virostek tries to pattern his playing style after the sheer athleticism and flexibility of Los Angeles Kings goalie Jonathan Quick and the technical expertise of Sergei Bobrovsky of the Florida Panthers.

When he is not playing hockey, his primary passion, Virostek unwinds on the golf course, a sport he picked up when he was 7. He also loves listening to music — anything from 1980s classic rock to modern country — and playing it on his electric and acoustic guitars.

Golf and music have helped shape his personality on the ice.

"I would describe myself as calm, cool, and collected in goal," he said. "I play with high intensity and quickness, but when things go wrong, I don't overreact."