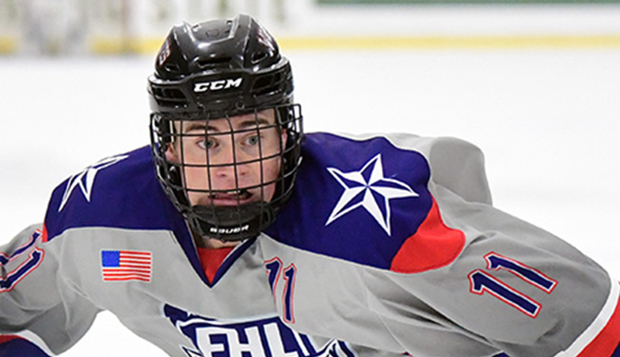 D.J. Schwenke has scored 56 goals and distributed 17 assists in two and a half seasons with the New England Wolves.

D.J. Schwenke, a team captain and forward tied for the scoring lead on the Eastern Hockey League's New England Wolves this season, recently committed to continue his career with Liberty University's ACHA Division I men's hockey team beginning next fall.

"He's a guy who will embrace the culture of our program and is a good fit, both on and off the ice," Flames Head Coach Kirk Handy said. "He's got a good scoring touch, can kill penalties, and play in many different situations, and we are really excited for him to start here in the fall."

Schwenke grew up in Colorado Springs, Colo., home of not only the U.S. Olympic Training Center but also the USA hockey headquarters. He started skating at 2-years-old and playing hockey at 4, rising through the youth ranks before playing for his high school team and with the New England Wolves.

"I want to go as far as I can, and I know Liberty will help me to do that," said Schwenke, who is in his third season and second as a team captain for the Wolves.

He considers himself a leader by example and has worked on being an encourager this season, playing in a secular environment.

"I tell myself the three years of junior hockey I've played were God testing my faith and the four years at Liberty will be God strengthening it and rebuilding it," Schwenke said.

Schwenke, who plans to study civil engineering at Liberty and eventually pursue a professional career in residential and commercial land development, comes from a family of engineers. His father, Doug Schwenke, owns JDS-Hydro, a civil engineering consulting firm in where his mother, Stephanie, works as a chemical engineer. D.J. Schwenke's uncle is also on staff, and he has interned there each of the past three summers. His older brother has a degree in engineering physics and younger brother is studying mechanical engineering.

Schwenke was interested in studying and launching his collegiate hockey career in a Christian environment. He researched Liberty before visiting campus over College For A Weekend (CFAW) in early November, meeting many of the current Flames and watching them defeat Ohio in the semester's second Midnight Mayhem game.

"A big draw for me coming to Liberty is that I knew it would be losing a lot of people," Schwenke said, noting more than half of this season's roster will be graduating this spring. "I got to be a part of a reload at New England and exceled in that environment, so I thought it would be best to do that again and to be a leader on the team."

After scoring 18 goals and distributing 29 assists in 50 games in his first season with the Wolves in 2017-18 and netting 19 goals and setting up 33 others in 44 games last year, Schwenke has 19 goals and 17 assists so far this season for the team based in Laconia, N.H.

At 6-feet, 190 pounds, he thrives in the physical game with plenty of backchecking and is adept at scoring down low in the creases.

"All of my goals come from right in front of the net, most of the time, and I am super aggressive on the forecheck," Schwenke said. "Watching me play, my coach says I am the hardest working player on the ice, if not always the prettiest."

After New England ended 2019 on a six-game winning streak, Schwenke returned to New Hampshire on Sunday for the second half of his season with the Wolves in preparation for transitioning to Liberty.

"Players are going to be bigger and faster," Schwenke said. "It is going to be a big adjustment, but I'm pretty sure I can handle it pretty well."