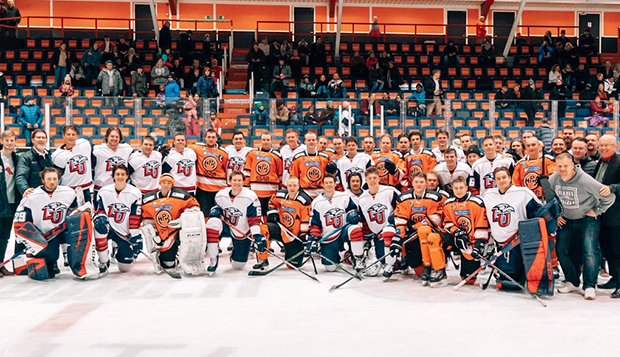 Liberty poses with players from Finland's HPK U18 club team after the Flames' 6-3 victory. (Photos by Olivia Becker)

Aside from recovering from jetlag, it has been an eventful first few days of Liberty University's ACHA Division I men's hockey team's LU Send trip to Finland since arriving in Helsinki on Friday.

Following orientation through Operation Mobilization (OM), the mission organization Liberty is partnering with, the team shared testimonies and Club Sports Global Outreach Director Brian Davidson delivered a message directed to youth on how to use spiritual and physical gifts, including playing hockey, for God's glory.

On Saturday, the players participated in a Kids Action Night at a local school, engaging in games with children in the community. Then on Sunday, Davidson preached at United Community Church, where OM missionary Dave Pike and his family serve, while team members led the Sunday School classes.

Later that afternoon, the Flames drove an hour and a half to Hämeenlinna to compete against a club team from Finland, HPK U18 Hockey, in a game witnessed by 500 spectators in La Pohjantähti Areena.

"It was fantastic," Flames Head Coach Kirk Handy said. "The lines of (senior forwards Victor) Blomberg, (Ryan) Cox, and Roberts and Thompson, Bartel, and Gammer looked great playing together. We had supper with the team after the game and exchanged gifts and ideas."

Gifts given by the Flames included New Testament Bibles with testimonies from Christians in the NHL, and players had opportunities to share their own stories with the Finnish youth of how God has transformed their lives.

Liberty's 30-member team looks to make the most of its final four days in Finland before flying back to the United States on Friday morning. The itinerary includes a "Sports Ministry Morning" on Monday, when the team will talk to leaders of local churches and organizations about establishing sports ministries connected to local church plants, such as Pike's in Hämeenlinna.

Then, on Tuesday, the team will participate in school assemblies and classroom discussions at a local school and share an evening of prayer with another local church. The Flames will conduct a hockey clinic at a local school on Wednesday followed by a street hockey challenge with the local community and a youth church event on Thursday.

Flames fans are requested to pray for the hearts of the hundreds of youth who will hear the Gospel and see God's love for them through the school programs, kids events, and hockey clinics the players and coaches conduct this week. Furthermore, the team is praying it will be able to serve Pike and his local church and help with the church-planting strategy to advance the Gospel in that community; that God will use team members as witnesses and grow stronger in their own faith, loving Him and others more; and for team unity and safety in travel.